Another slow morning with some coffee in the room, reading, study of music, and then down to breakfast. This morning, Leslie tries the “American Breakfast” sandwich choice. It turns out to be a club sandwich an odd option for an actual American! We also go out and walk around the lake that is across the street from our hotel. One trip around is 1200 meters or about 3/4 of a mile. There are walkers, fast walkers, and joggers at all hours of the day doing their laps every day. Furthermore, there are exercise stations sprinkled throughout the area. From the looks of people in this city, staying in good shape is a priority.

Public art can be found all over Changwon and the lake is no exception. Not only is there a sculpture park on the far side, but the lake also features a water and light show that goes off a couple of times each evening. Round boats can be rented to get a “close-up” experience, but we also have a great view from our 8th floor window.

The weather has been relatively mild with temperatures in the mid to low 70’s. Still, the humidity a makes it feel warmer. Since it is Father’s Day (in America, not Korea) Leslie offers to take me to lunch. We walk around the immediate area, but have no idea what any of the restaurants serve since every sign is in Korean. The exceptions are the few American chains such as Dunkin’ Donuts and Baskin Robbins which we swear to avoid. Ultimately we end up at the other restaurant in our hotel and have a Korean styled BBQ Lamb lunch that is exquisite.

Choi picks us up around 3 PM and we head to another part of Changwon to watch the local baseball team (the Dino’s, short for dinosaurs) play a game. On entering the stadium we are handed a paper fan advertising the new Jurassic Park film (a bit of irony here.) It is at an older stadium that is being replaced with a new one currently being built next door. This is professional baseball in Korea. There are about 12 teams in the league and it is at a level of triple A ball in the U.S. The teams are owned by large companies throughout the peninsula. Each club is allowed 2-3 foreign players so we see the home team with a former Major league player at first base and the opposing team with a starting pitcher who used to play for the St. Louis Cardinals. As far as an American watching the game, it is a completely different experience! There are cheerleaders and a yell leader who lead a song that is designated for every player that comes to bat. Music is anything from Eine Kleine Nachtmusik, to Colonel Bogie March to a song from Phantom of the Opera, all with new Korean words added. EVERYONE sings along (except us who didn’t know the words.) And they sing throughout the game when the home team is up. When the visiting team is up, there is a contingent of volunteer fans that has come to support them and THEY sing their own team’s song. A children’s Tae Kwon Do demonstration from a national school is part of the entertainment along with whatever is broadcast on the Jumbotron scoreboard.

The Dino’s score first on a home run in the bottom of the first, then the game becomes a pitchers duel for five innings. The visiting team scores two runs in the top of the 6th, then adds another in the top of the 7th. In the bottom of the eighth, the Dino’s tie the score, although they threatened to add more. In the top of the ninth the visitors score again on a home run and though the Dino’s put two runners on in the bottom of the ninth, a double play ends the game. There are MANY changes of pitchers during the last three innings, but the cheerleading team keeps the spirit of the crowd alive and the game is an exciting spectacle to watch. All during the action, food and beer is consumed making for a most enjoyable afternoon.

After the game we return to the area near the hotel and Choi takes us out for shrimp sushi. We arrive at a restaurant to find the customary fishtanks lining the restaurant, some filled with colorful orange and red shrimp. Choi orders for us and soon we have a platter with a dozen or so shrimp, alive and moving still, lined up for presentation. Our server comes up with a large pair of scissors and proceeds to cut off the heads. Those are collected returned to the kitchen where they are breaded, fried, and brought back to the table. 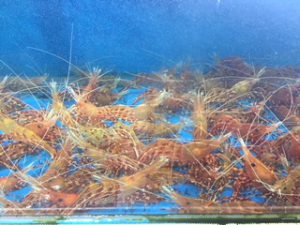 In the meantime, the shrimp bodies are a Korean delicacy that is about as fresh as you could possibly want. The usual Kimchee and other sides are on the table and something new: silkworms. Leslie and I look on suspiciously as Cho pops a few into his mouth. I decide to take the plunge and try one . . . Leslie soon follows. Let’s just say that it must be an acquired taste. And as we discover, not all Koreans like the “little buggers.” Still, having eaten one and lived to tell about it, makes for a good story.

It is getting late so we head back to the hotel. First rehearsal is the next day and I am anxious to get back to my scores.