The Sheraton Hanoi serves an international clientele and the breakfast in the lobby restaurant shows it. There are stations for Korean, Japanese, Chinese, plus western tastes. The chef makes great omelets at the egg station, there are unusual fruits, lots of pastries, and of course pho, the traditional Vietnamese soup with vegetables. It seems like a fitting start to our ten days in this country for we will discover that one of the best parts about it is the food. This will be demonstrated in ample amounts every time we sit down for a meal with people.

Today’s schedule would be two rehearsals with the VNSO while Leslie gives a Masterclass with violin students of Thang’s at the Academy. We are picked up by a driver who deals with the traffic to the rehearsal hall (a 30 minute drive), with plenty of time to spare before the 9-11:30 morning rehearsal. In the previous evening, Lan and Thang have briefed me on the orchestra members backgrounds. These are well-trained musicians who play a lot, but also have regular jobs outside of the orchestra to help them make a living. Some are teachers, some work in restaurants. There are even some who have advanced degrees in other professions such as architecture and work in that field as well. The fact that the orchestra rehearses during the daytime is amazing as it would seem to make holding down another job challenging. Somehow these people make it work.

The morning rehearsal is devoted to the Four Dance Episodes from Rodeo by Copland. Buckaroo Holiday is a rhythmically challenging piece for any orchestra and it takes awhile for the music to line up, but after an hour or so the orchestra begins to understand how the piece goes and seems to be enjoying playing something American. After the 20 minute break, we zero in on Hoedown, the Corral Nocturne, and finally Saturday Night Waltz. These people have a lot of talent and although sometimes the communication is slow (many of them understand English, but mostly what I say gets translated in Vietnamese) progress is being made.

Lunch is a gathering at a Fish Restaurant with the Music Director of the VNSO who is in town to conduct a New Years Day concert, the Executive Director, the Assistant Concertmaster, Leslie, Thang and Lan. It is a lively affair with wonderful food and soups. Thang takes great care in introducing me to Fish sauce and after copious amounts of lime squeezed into it, it adds a wonderful pungent taste to the other dishes. It is a huge amount of food (something typical of all the meals we will have!).

The afternoon is filled with a second rehearsal devoted to the Dvorak 6th symphony. The VNSO has played neither the Copland nor the Dvorak, but are certainly game in learning new works. We manage to get through all four movements so they have an idea of the flow and that is it for day. The members scurry off, some commenting that their heads have been filled with a LOT of new information and sounds. Lan tells me they are definitely enjoying themselves.

Many years ago I read a James Bond novel where some of the action takes place in Saratoga, NY during the summer. I recall how he showered four or five times in one day, changing his clothing each time. After the first half of the rehearsal, Lan commented to me how wet I looked. Coming from a dry Colorado climate to 65-70% humidity takes some getting used to. Needless to say, before dinner, I was quick to take a shower and change clothes, a pattern that will repeat itself no doubt through the rest of our stay.

The more time I spend with Thang, the more I realize how much the two of us have in common. Both of us teach violin to students of all ages in addition to our class at the university — and both of us have studios that seem to attract families from a particular culture. In my case in Ft. Collins, most of my home studio students are Chinese — either from the mainland, or Taiwan, or Hong Kong. In Thang’s case, his studio is almost entirely Japanese.

Thang teaches only half-hour lessons to each of his 40 students each week and lets them know that he will tell them something “only once” — so they better be paying attention! The results are amazing — all of the students I work with have tremendous concentration and have achieved incredible progress in a very short time.

The first is a 10-year-old boy who only started the violin 3 years ago. He plays Kreisler’s “Praeludium and Allegro” for me with ease and flair. (I find out later that he has won 1st place in his age category at a recent competition in Thailand). I suggest using more bow in a few places, making more dynamic contrasts here and there, and point out sections where he can stop his bow so the music will “breathe” more between phrases. He happily complies.

The second student is even younger — an 8 year-old girl who only started violin 3 MONTHS ago. She plays a movement of a Rieding concerto (a piece I would normally assign to someone in their 3rd or 4th YEAR) and a short showpiece. I recommend a different bowing which I think makes it easier to capture the phrasing and she instantly changes the bowing for every similar passage in the concerto. I marvel at her talent, intelligence, and concentration.

I go on to coach two of Thang’s university students — the first playing the opening movement of Wieniawski’s 2nd violin concerto and the other playing two movements of solo Bach. Because both students have solid technique and are totally prepared, my comments are focused on phrasing suggestions and possible different “tone color” choices for various passages. Both young women are eager to try new ideas and quick to succeed with them.

They are also eager to receive the brochures that our Marketing Director, Jennifer Clary, has given me about the String Division and Graduate Studies at CSU. I promise that I will talk to our Violin Professor, Dr. Ron Francois, about the possibility of doing a Skype interview/audition when I get back to Ft. Collins to see if they might want to apply to CSU for a masters degree in violin performance.

Thang and Lan take us to dinner at an enormous shopping mall which includes hundreds of stores and restaurants, a huge cineplex, and a busy ice-skating rink (apparently it operates an indoor water park in the summer). While we share a feast of Thai food, I marvel at how many families and young people are out shopping late on a weeknight. Lan insists on taking me to a store where we pick out a few outfits for my grandchildren while “the boys” go on ahead to her sister’s apartment.

We join them later for a nightcap in one of the most luxurious apartment complexes I have ever seen — very delicately clinking gorgeous hand-blown wine glasses she has brought back from Prague. Ha works for the Ministry of Education and her job includes helping Vietnam implement an international assessment program which is apparently operating in over 80 countries. She tells us she has already travelled to over 40 of them — attending conferences and observing how assessment and curriculum are developed around the world.

Ha also owns a farm about 90 minutes outside Hanoi — and has invited us to visit it this Sunday! 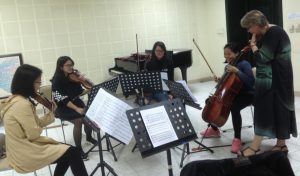 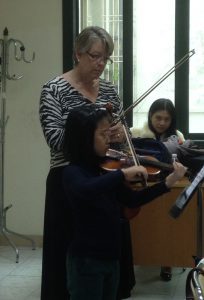