Concert Day.  We leave the hotel at 8 AM for a 9 AM rehearsal. There is a huge poster outside the opera house with Do Phuong Nhi and my photos on it. We are early so there are very few people around, but fortunately we know the way to the dressing room area and manage to claim one of them.

I wander onto the stage, which is still being put together as well as the shell being put up. The stage is huge very much large enough for an opera turntable for sets when a theatrical performance is presented. The orchestra only takes up about half of the space, with the front half extended in front of the proscenium (mostly the strings.)  It is clear, the pit must be huge and they’ve had Puccini sized orchestras down there of about 65. That would be something to see!

By 9 AM the shell is up and the rehearsal gets started about 9:15. One player is missing because of a family emergency, but fortunately they are only a few minutes late. The Copland and the concerto go relatively smoothly.  Balances are better than I anticipated although it seems that the brass sometimes tends to overplay the space. We get to go over a few things in the Dvorak and get through the entire symphony just as time expires. I thank the orchestra for their work and they applaud. Eight rehearsals down and only the performance is left!

Lan, Thang, Nhi, Leslie and I are hosted for lunch at a western styled steakhouse by Honna the VNSO’s Music Director and his significant other, the assistant concertmaster of the orchestra and also a gracious host. It is once again a wonderful and large meal that ends when the ACM pulls out some Durian cookies for an ending sweet. Durian is a somewhat controversial crop stemming from its unique aroma. As the Vietnamese say, the fruit “smells like hell, but tastes like heaven.” Lan and Nhi really like Durian, but Thang says it should be eaten in the bathroom . . .! The smell is so strong that there are many hotels that have banned the fruit from their premises. I brave the aroma (which doesn’t seem all that bad) and try a couple of cookies. To me, they are quite good—a new taste treat.

We are returned to the hotel by the VNSO driver for an afternoon of rest before returning to the Italian restaurant we dined at the previous Monday. A little pasta and salad (and we make sure our hosts understand it should only be a small amount) seems to be a great way to get the evening started. We walk the two blocks to the hall braving the traffic and crowds to get to the musicians entrance. Lan and Thang make sure that the guest artist and conductor manage safe passage, something more challenging for a pedestrian than any westerner could imagine. Lan plays social butterfly with well wishers in front of the hall, eventually finding her way back stage with the rest of my clothing that she insisted on carrying. The humidity concerns me that I might go through several changes of clothes on this evening. I certainly have come prepared with extra undershirts and a hair blower, all of which get used during this event.

The hallways are abuzz with excitement and indeed they are expecting a full house. At shortly after 8 PM, the orchestra takes the stage en mass, Lan tunes up the ensemble, and I come out for the Copland. I’d been told that going to a concert in Vietnam was similar to China and that the crowds were boisterous and more like a sporting event. However, other than the spontaneous applause after Buckaroo Holiday, it was clear that everyone had truly come to listen to their orchestra with quiet attention.  The Copland was well received from the capacity audience. Nhi then took the stage and wowed the house with her spirit and prowess on the Bruch. The audience gave her four curtain calls and she was given two huge bouquets of flowers.

At intermission, the hall outside the dressing rooms is filled with family and friends of Nhi, Lan, and Thang. This includes Honna-san who stops by to tell me the Copland was terrific. As photos are being taken in the hallway, I towel off, blow-dry my hair into some semblance of neatness, and get my game face on for the 2nd half. Their librarians are efficient in taking scores to put on my stand and returning the first half, always being gracious in doing so. Everyone speaks a little bit of English, so communication has always been fairly easy during the concert process.

The Dvorak is ready to roll and the orchestra plays as if they are on a mission to prove that this is a piece they intend to play for years to come. The audience again breaks into applause after the first movement. The pastoral second movement is met with quiet reflection in the audience save for one really loud sneeze out of the house. The furiant/scherzo is played with great energy and one little quirk I threw into the final third goes off without a hitch. The last movement, which had been the albatross for the strings, is played with élan including the frenetic finale that the cellos set at a blistering pace. The performance produces five curtain calls and I’m told later that the chanting style applause seemed to indicate that they wanted to hear the finale again, something that was lost on me. . . .still, we left them wanting more.

The orchestra members greet me back stage with smiles and many kind words. It seems that we’ve made some great music together and they express their appreciation. Again the hallway is overrun with people all seeming to want to meet an American conductor, even if his hair looks like he just stepped out of the shower. The after photos with me in my white tie and tails make me look like someone from the “roaring twenties” with slicked down hair, but admittedly, Brylcreem was never my thing. (See the climax to The Sting if you miss the reference).

We eventually work our way back to the Italian restaurant where we toast with wine, pizza, pasta, salad, and good cheer the success of the evening. Around the table are the Executive Director Mr. Hong, Assistant Conductor Ling, Thang, Lan, Nhi, the Music Director Honna and a few others. Honna tells me that I remind him of the Czech conductor Zdenek Macal, which I take as a great compliment. Later I would learn that he wants me back as soon as possible, again something that I am thrilled to hear.  However, change is in the future for this orchestra. On a positive note, there is a new rehearsal space that is to open soon. But, there is also word another orchestra is soon to start up that may bring more players from outside of Vietnam. It is not clear what this development means for the VNSO as qualified players are not easy to find and they will be losing a few of their own to this new ensemble. We can only wait and see what happens as the future unfolds.

After a couple of hours of revelry we are returned to the hotel for some rest and recouping. Our journey is far from over and we still have more of North Vietnam to explore! 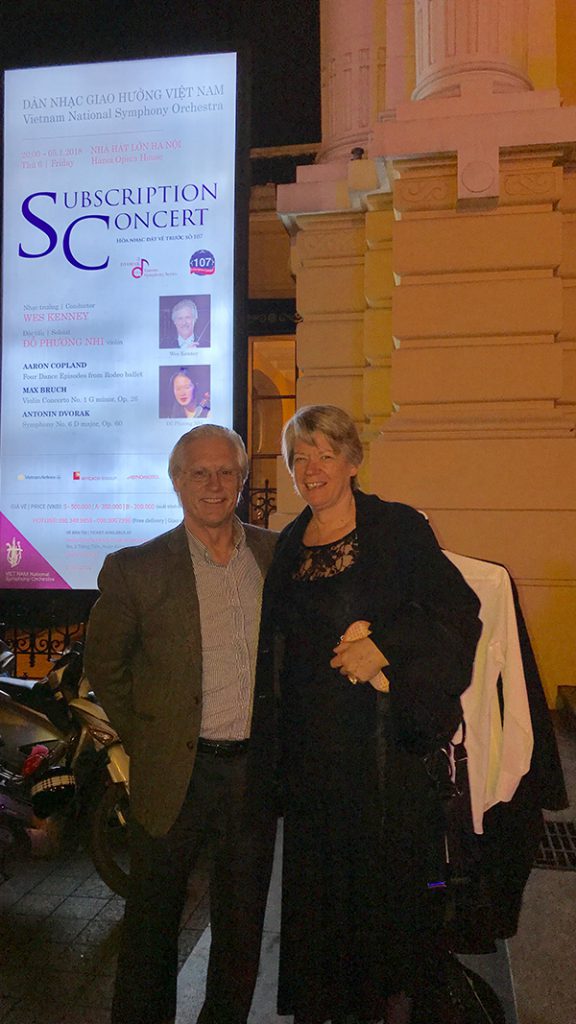 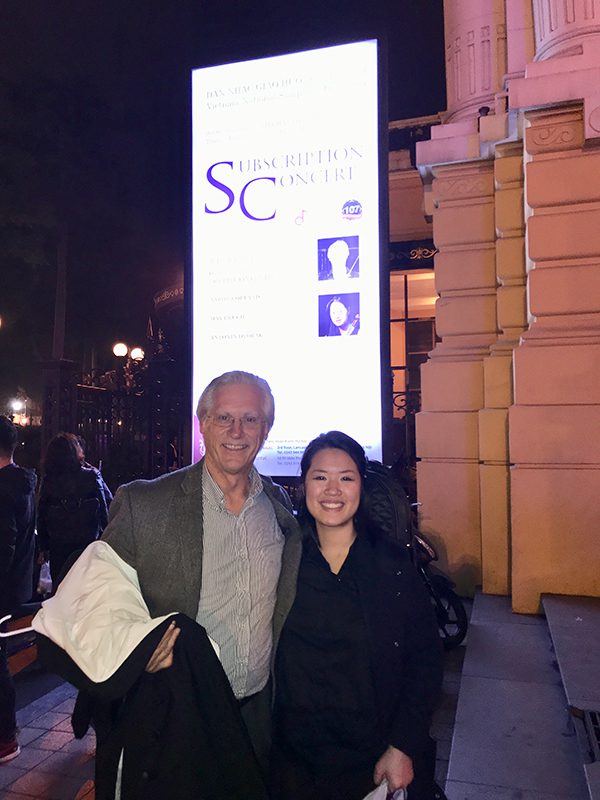 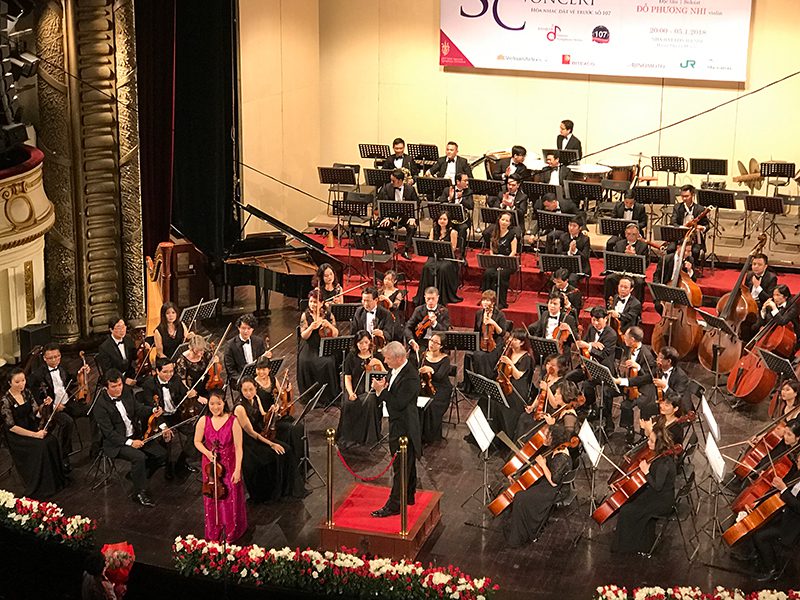 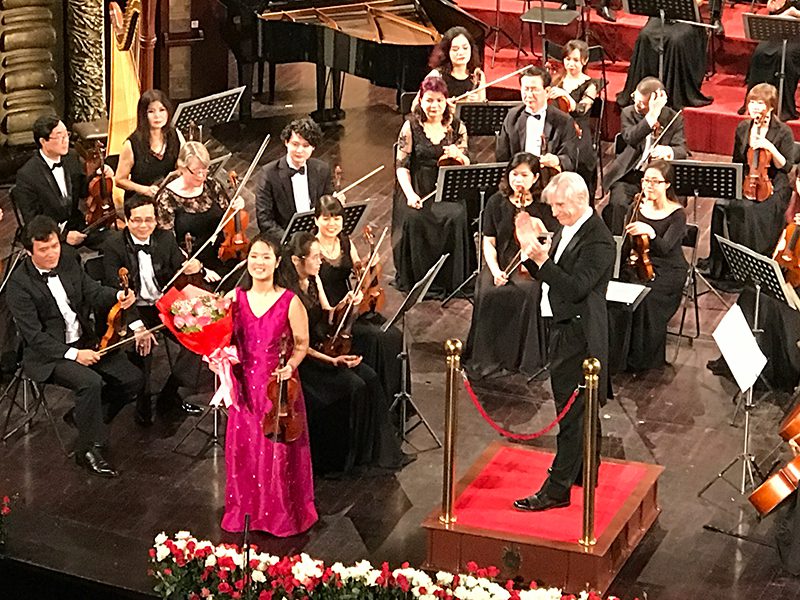 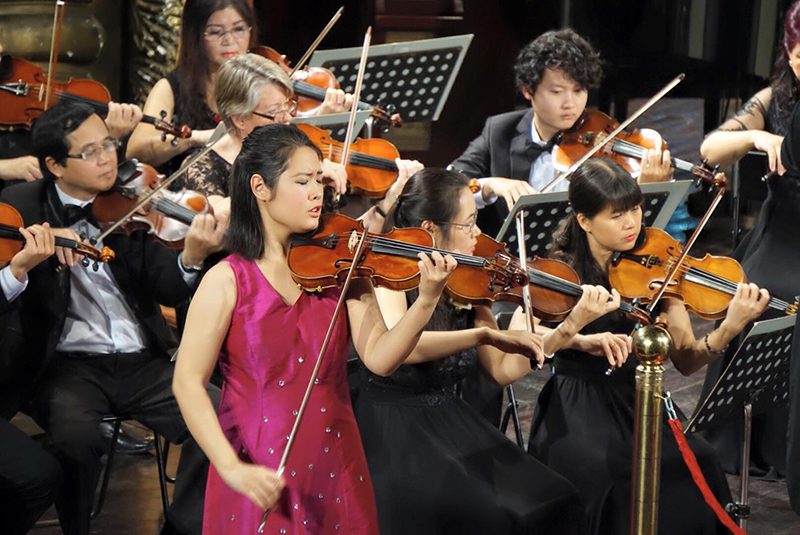 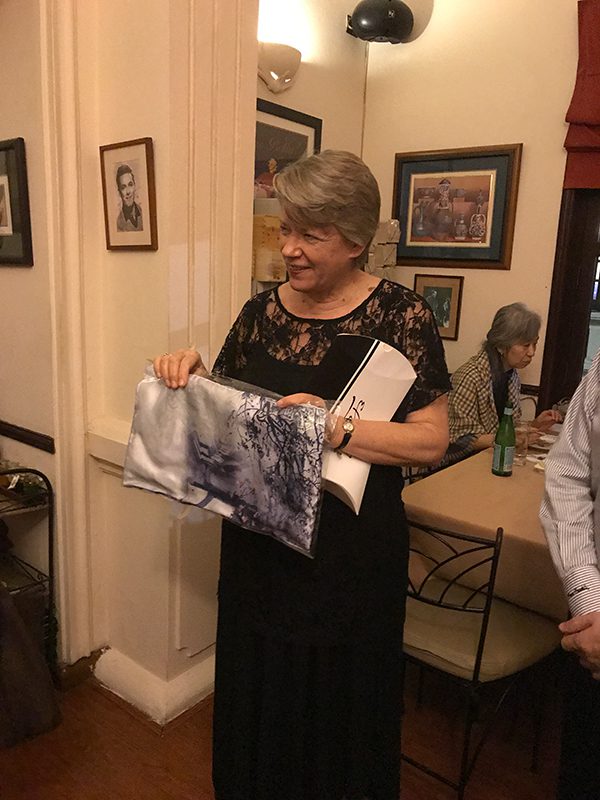 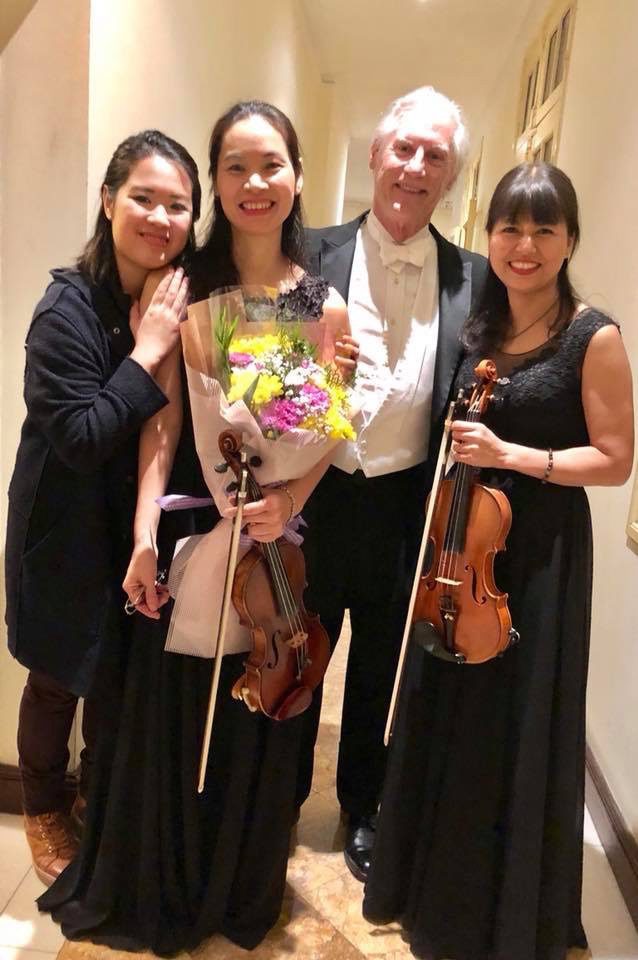 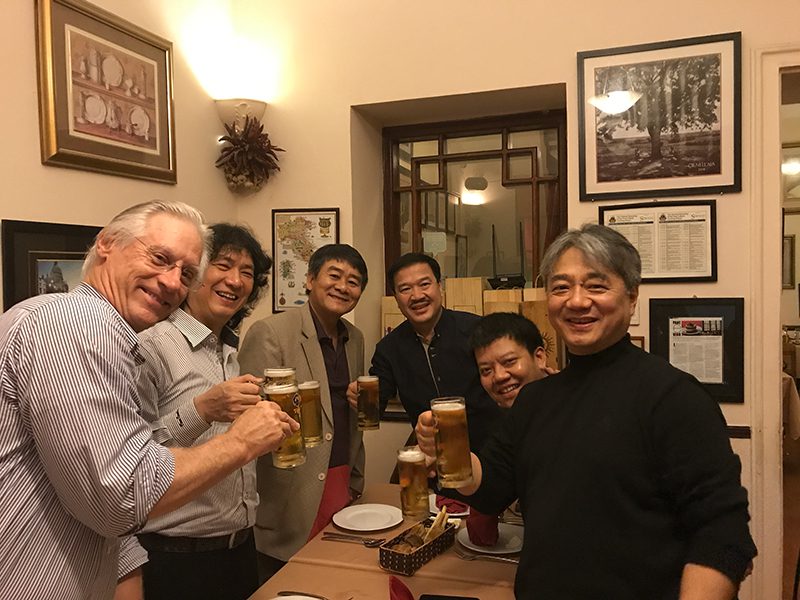 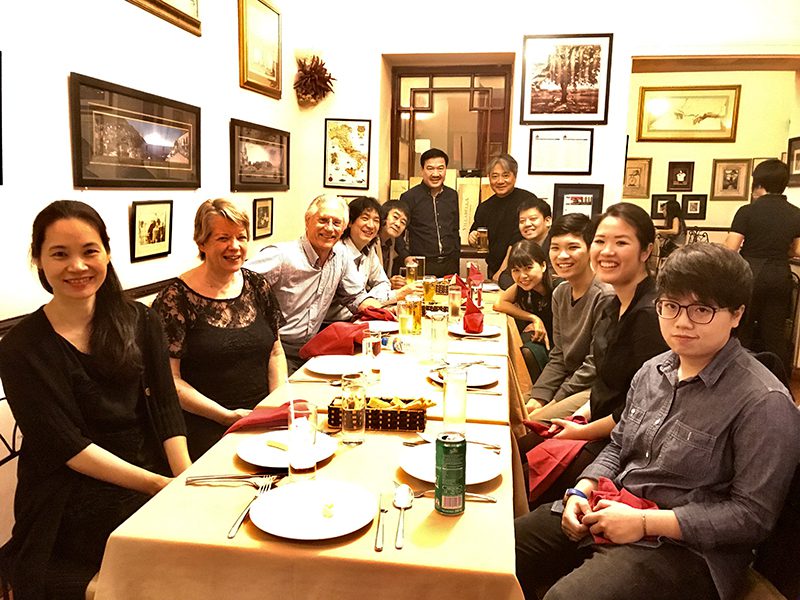