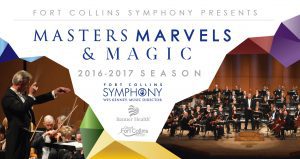 The Fort Collins Symphony is offering a 25% DISCOUNT on 2016-17 Season tickets to first-time subscribers who will save anywhere from $47 to $75. According to Board President Rhett Strom, “it is our goal to give all music lovers the opportunity to attend the Masters, Marvels, & Magic series of five Masterworks and one Pops concert.”

Now in its 67th year, the Fort Collins Symphony under the direction of award-winning Maestro Wes Kenney is offering a season of delightful surprises, engaging programs, and stunning music. The Season kicks off on October 8, 2016 with a concert presenting pieces by beloved composers Rachmaninoff and Dvorak. Award-winning pianist and guest artist Xinyu Chen will dazzle as she performs the Rachmaninoff Piano Concerto No. 2.

Other Season highlights include:

Marvelous Magical Movie Master, a Pops concert showcasing John Williams’s most recent scores and favorites from the past.

Season ticket subscribers—both new and returning—who are unable to attend any of the 6 concerts may turn in their tickets to the Lincoln Center as a tax deductible contribution. Season tickets may be purchased online at LCtix.com/FCS-Season-Tickets, by phone at 970.221.6730, or in person at the Lincoln Center Box Office at 417 W. Magnolia.

For more information about the upcoming season CLICK HERE or call 970.482.4823. The 2016-17 Fort Collins Symphony Season is sponsored by Banner Health with additional support from the City of Fort Collins Fort Fund.