History is cruelly reductive, and it is the natural state of our collective memory that it often bears little resemblance to the balance of affairs that characterized the past.  Whole lives, bodies of creative work, and popular acclaim of significant artists commonly disappear from our experience—or survive in a cartoonish reflection that often singles out only one or two works of art from a vigorous and influential personal oeuvre.  Lucky is one who survives the winnowing out process.  Carl Maria von Weber has barely survived that process, and he, one of the most well-known conductors, composers, and members of the musical community of the first half of the nineteenth century, is now remembered for only a few of his many compositions.  His important early German romantic opera, Der Freischütz (The Marksman) is his most performed work nowadays and the overture to his other late opera, Euryanthe, is familiar.  And of course, performers on those instruments cherish his small group of solo works for clarinet, bassoon, and piano.

But, during his heyday Weber composed in almost every genre, held important positions as a conductor (he is considered one of the fathers of modern conducting), traveled widely, wrote respected music criticism and essays, and knew almost every important continental musician.  His imaginative treatment of the orchestra was a major step in the growth of its color palette at the hands of romantic masters of it, including Meyerbeer and Wagner.  Finally, Weber is considered one of the most important composers as late musical classicism moved into the romantic age.  Of course, the towering figure of Beethoven obscured many like folks of the time.

Weber (he was not of the nobility—the “von” was an affectation initiated by his father) began his musical training early.and by the time that he was fifteen or so, he had already written three operas.  The first is lost, the second is partially so, and it is the light-hearted, rather domestic opera, Peter Schmoll und seine Nachbarn from 1802 that provides us with a taste of his youthful skills. It is rather redolent of Mozart in many ways—given the time and the composer’s age, why shouldn’t it be—and a far cry from the ominous Romanticism of his later masterpiece, Der Freischütz. Already, it displays many of the mature composer’s signature traits, including inventive and attractive melodies, imaginative writing for the woodwinds, allusions to tunes from the opera proper, and a penchant for dotted, dance-like rhythms.  His overtures are usually cast in sonata form, so we will hear at least two main melodies and some development of them—including some imaginative, proto-romantic key areas—before a brief recapitulation.  A warm, slow introduction opens our overture, and leads to the allegro main theme, a dancing little staccato tune in the solo oboe, interspersed with stentorian outbursts from the whole orchestra. When the second theme arrives, it, too, is announced by the oboe.  A few dark and foreboding moments take us to more of them in the development, where some traditional sturm und drang elements provide a bit of dramatic contrast.  The stormy drama soon ends, and a little interlude of serene woodwind solos provides a moment of quiet before the familiar dancing oboe from the beginning initiates the recapitulation. 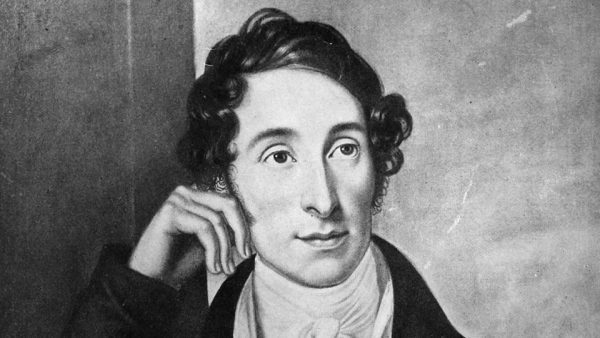