Pulitzer Prize-winning poet Carl Sandburg penned these words in 1918, revealing his thoughts on the futility of war and its associated senseless deaths. American composer Coleridge-Taylor Perkinson (1932–2004) embraced the same words almost 40 years later, as inspiration for a new work: Grass, a one-movement composition for piano, strings, and percussion. Perkinson grew up in New York City. His musician mother named him after the early 20th-century British, mixed-race composer and conductor Samuel Coleridge-Taylor. Perkinson not only lived up to his namesake’s achievements, producing a solid core of art music compositions and conducting various ensembles, but he also made a name for himself writing and arranging jazz, popular music, and film scores. Throughout his career, Perkinson advocated for the Black community and its performing artists in particular. He is credited as a founder of the first fully integrated orchestra in the U.S., the Symphony of the New World (1971), as well as Chicago’s New Black Music Repertory Ensemble (1999), a group dedicated to performing diverse musical styles.

Just 24-years-old at the time Grass was composed, Perkinson had watched as young soldiers, many of them Black Americans, were shipped off to fight in the Korean War. In 1948, Harry S Truman had issued an executive order calling for full racial integration of the U.S. Armed Forces. Military leaders, however, were slow to implement the policy. When the U.S. began formal military actions supporting South Korea in 1950, many U.S. divisions were still segregated. Over 100 units were Black. These soldiers often experienced discrimination in training, were undersupplied in the field, and at times were assigned white commanders who saw the appointments as “punishments.” Yet these servicemen fought bravely. By the end of the war in 1953, disparities had decreased significantly as units were finally desegregated and more Black officers rose in rank. Over 600,000 African-Americans served in Korea. More than 3,000 of them died in active combat. Perkinson was of draftable age throughout the entire conflict and stories of young men like himself, dying in the field and languishing in POW camps, must have affected him deeply.

A man of many talents and remarkably broad artistic interests, Perkinson composed in classical, jazz, and pop musical styles, and was active in television, film, and dance, as well.  A respected conductor and pianist, he was (probably) born in New York City.  After attending the prestigious New York High School of Music & Art, he attended both New York University and the Manhattan School of Music, receiving both bachelor’s and master’s degrees from the latter.  His teachers including the esteemed choral conductor, Hugh Ross, and the well-known composer, Victorio Giannini.  Founder and director of the New World Symphony (the country’s first fully integrated professional orchestra), he performed with jazz great, drummer Max Roach, and worked with popular singers Harry Belafonte and Marvin Gaye.  Active as a conductor, he was composer in residence or music director for the Negro Ensemble Company, the Dance Theater of Harlem, and the famed Alvin Ailey Dance Company.  And if that wasn’t enough, he studied conducting at the Mozarteum in Salzburg.  His several film scores include “A Warm December” (1973), starring and directed by Sidney Poitier.  He died in Chicago in 2004 at the age of seventy-four.

His “classical” compositions for orchestra include Grass, subtitled “Poem for Piano, Strings, and Percussion.”  Written in 1973, it is thoroughly in the tradition of his academic training and many of the mainstream “classical” techniques and styles of that time.  The title of Perkinson’s composition refers to the well-known poem of Carl Sandburg, “Grass.”  That poem, as you may remember from English class, is a melancholy reflection on the futility of war, and a consideration of whether the grass that grows over old battlefields really covers the deep scars and wounds of fatal conflict.  According to Perkinson his work “ . . . was written during a time when I imagined that I was going to be involved in the Korean conflict and was written from the perspective of a black person being involved . . . .”  He was not willing to delve deeper into the relationship between the music and the poem.

What is obvious, though, is the congruence between the respective rhythms of the opening words of Sandburg’s poem, “I am the grass.  I cover all.” and the pervading motive of Perkinson’s work.   Perkinson sets the four syllables of the words with four distinctive notes, comprised of a movement down a step, back up, and a descent of a fourth.  The entire work is built out of it, a masterful example of the compositional virtue of “economy of means,” the non plus ultra of which is the first movement of Beethoven’s fifth symphony (ta, ta, ta, dah.)

The “I am the grass” motive is announced immediately in the strings, accompanied by percussive chords in the piano.  This brief introduction is quickly followed by an extensive contrapuntal elaboration in the strings, with complementary motives constantly weaving around the main one.  It’s a turgid, intense section, the metre of which is constantly shifting, with punchy accents and displaced patterns creating an anxious, driving unease.  While there is plenty of dissonance, there is a tonal center, and the whole could reasonably be compared to the textures of some of Stravinsky’s neo-classical works.  Throughout, the piano and percussion complement the strings with frequent opportunities to take the lead.  The tempo and drive, contrapuntal weft, and motivic development never cease, though.  Finally, all the flurry slowly dissipates and the piano quietly—again, using a variant of the main motive—takes us to the “B” portion.

The middle section is conventionally in a contrasting mood of some repose, and a lyrical, serene rumination it is—cast in lush, somewhat neo-romantic textures.  But our ubiquitous friend, the main motive, is always lurking in the material somewhere.  Solo passages for the piano are frequent, with pianissimo throbbing strings ending the diversion, punctuated by a soft, enigmatic tap by the timpani.

A much louder stroke by timpani announces the opening of the last section, in which the “main” motive is not so evident, but nevertheless is informative, but in clever guises, including inversions.  The driving, rocking tempo is even more intense and reckless than that of the first section, punctuated by emphatic percussion and smashing chords in the piano.  A relentless cascade of overlapping ideas quickly drives us to the dynamic conclusion.

While active in a remarkable variety of jazz and pop musical endeavors, Perkinson wore many musical hats with equal aplomb.  Grass, like his other classical works, shows his complete mastery of “serious” twentieth-century musical composition.  Audiences deserve to hear more of them. 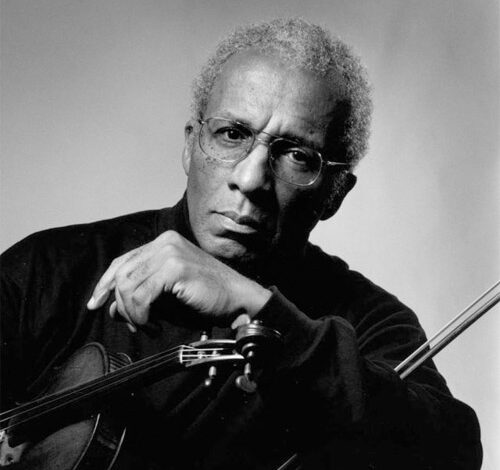