In the crystalline perfection of Mozart’s works, pride of place must be given to his operas, nonpareil dramatic works that unified drama and music like none before or since.  And secondarily, there are the piano concertos—a genre that Mozart more or less established in its mature guise. Then there are his symphonies. He wrote forty-one of them and they span his artistic career from early to late.  But of them we primarily hear nowadays in this country No. 38 (“Prague”) and the three magnificent symphonies from the wondrous summer of 1788—Nos. 39, 40, and 41.  Occasionally we hear No. 25, the so-called “Little G minor”—an energetic little affair that is the perfect example of the “Storm and Stress” style.

But there is one more that joins this small group of the composer’s acclaimed and oft-performed symphonies, and that is No. 36.  Composed in 1783, during a brief stay in Linz, Austria, during Mozart and his new bride’s return to Vienna on the way back from Salzburg, it only took the composer about four days to whip it up when a surprise concert was announced.

In a stroke a bit unusual for Mozart the first movement opens with a slow introduction—common for say, Haydn, but not so much for Mozart.  It’s not a weighty one, but does wind sinuously through some ominous minor key areas before the allegro spirituoso soon gallops off.  The main theme is heard softly, right away, followed by an emphatic repeat.  After a bit of bustling in the main key of C Major, the second main theme bursts out, but in the rather surprising and exceptional key of E minor (more on that anon).  More ideas follow in succession before a quiet little passage that leads to the usual repeat.

Development is next, of course, but in this case the composer, after some interesting harmonic excursions that focus on the minor mode, chooses to abbreviate the section—shorter than was usually his wont—and move on into a full recapitulation.  All of the delightful material from the beginning is heard—all in C Major, now, and the movement storms to an end.

All of this is fine, but it seems to this writer that the more salient aspect of this movement is the general tone, style, and specific rhythmic elements that pervade it.  Although the literature on this symphony seems to ignore it, it is clear that this movement is directly influenced by so much of what characterized Mozart’s operatic triumph of the previous year:  Die Enführung aus dem Serail.  The tale of an abduction of an Austrian girl into a Turkish harem, and the high-jinx surrounding her lover’s attempts to rescue her, infused the Singspiel with some of Mozart’s most effervescent, lively music.  Specific musical elements that appear in the opera, and in this symphony, as well, are hammering repeated notes, numerous excursions into minor keys, and a variety of musical motifs that brim with sly humor with an “oriental” touch.  It seems clear that only about a year later––flush with the success of his vivacious “Turkish” escapade in his ear and faced with a musical deadline–– Mozart should reach for some of the highly successful style of the recent triumph.

For those interested in such matters, the andante second movement is, a bit exceptionally, also in sonata form.  But, of more interest is the siciliano (dotted) rhythm of the main theme that provides an unusual grace and elegance with the motion of that dance. Also of interest are the dark intimations that punctuations from the timpani and trumpets interject from time to time.  This sort of thing in an otherwise graceful slow movement was a stroke of imagination, and bore much more fruit some two decades later in the works of Beethoven.  The following minuet is a familiar aspect of symphonies of this period, but Mozart’s touches keep it from being perfunctory.  The punctuating brass and percussion of the previous movement are illustrative.

The finale is derivative of the same operatic verve of the first movement, only more so, if that is possible.  It strikes one in the same brilliant humor that one will remember from, say, the overture to The Marriage of Figaro. There are six main themes built variously from arpeggios, on the one hand, and sinuous chromatic lines on the other. The angular transitional theme to the second key area—not the usual main theme––becomes the building block of the thorough development.  Those who expect Mozart to provide a second theme in a more lyrical vein will not be disappointed. But, the second part of it is more interesting.  Taking the characteristic, repetitive figure that rocks back and forth on the lower chromatic neighbor (so common in Die Enführung!), Mozart slows it down and crafts a lyrical little contrapuntal section out of it.  You’ll spot it easily as it begins with the prominent bassoon playing the slower notes, and answered by the oboe. That’s the whole of it. A full recap ends this scintillating affair.

Mozart may have just tossed the work off out of practical necessity, recycling the spirit—if not literally the exact musical elements—of the previous year’s operatic smash.  Nevertheless, it is a little masterpiece, and more than worthy of joining the triptych of great symphonies from the summer of 1783. 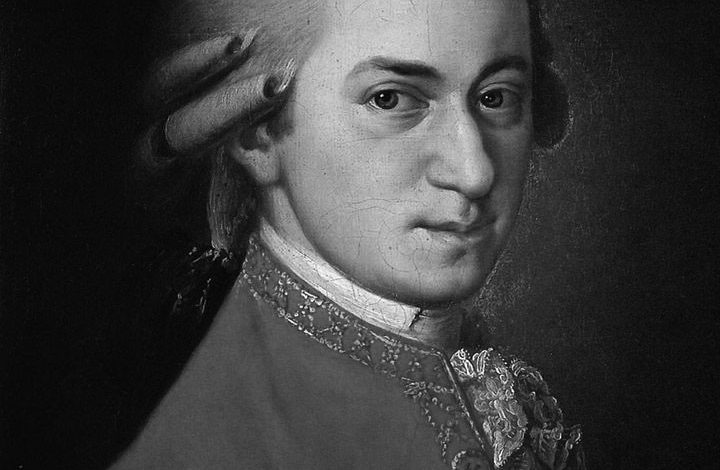