It is sometimes easy to forget that Felix Mendelssohn (1809–1847) died at just 38-years-old, perhaps because his published works sound so mature. Yet many were written when the composer was at an age when most of us are still trying to figure out where our talents lie. Hailed by Robert Schumann in 1840 as a new Mozart, Felix began his musical education as a child alongside his sister Fanny. Unlike the Mozarts, however, most of their early performances took place privately within their own residence. Still, the Mendelssohn household attracted many of Berlin’s top political figures, artists, and intellectuals for regular social and musical gatherings, allowing the siblings a certain degree of artistic notoriety. Mendelssohn began composing at age ten. Although only a small proportion of his adolescent works were published, by age seventeen he had come into his own. In 1827, the premiere performance of his Overture to a Midsummer Night’s Dream marked the beginning of a successful musical career. Two years later, Mendelssohn conducted a revival of J. S. Bach’s St. Matthew Passion, one often credited with instilling new life into the Baroque master’s oeuvre.

The years 1830 and 1831 were important ones for the young man. Mendelssohn was learning about life in the most exciting way possible—by traveling throughout Europe, taking in its wonders through the eyes of a curious, well-educated, and well-connected 21-year-old. Having already spent much of 1829 in the British Isles, he left Berlin in May 1830 for a grand tour of Italy, stopping along the way in Leipzig, Weimar, Munich, and Vienna. On his return in 1831, he landed once again in Munich, where Delphine von Schauroth resided, a lovely 16-year-old pianist who served as a musical inspiration. Mendelssohn’s contentment in the German city sounds forth in letters written home. In one, he exclaims: “It is a glorious feeling to waken in the morning and to know that you are going to write the score of a grand allegro … whilst bright weather holds out the hope of a cheering, long walk in the afternoon … I scarcely know a place where I feel as comfortable and domesticated as here. Above all it is very pleasant to be surrounded by cheerful faces, and to know your own is the same, and to be acquainted with everyone you meet in the streets.” [The Mendelssohn Letters] Ten days later, Mendelssohn’s music filled the Odeon concert hall. The program featured the Midsummer Night’s Dream overture as well as his 1824 First Symphony. The highlight, however, was the premiere of Mendelssohn’s Piano Concerto No. 1 in G minor, op. 25, with the composer at the keyboard. Though labeled No. 1, Mendelssohn had written other works for one or two pianos and orchestra in his adolescence. Yet this was his first mature work in the genre, a sort of coming-of-age concerto for a composer who was also a fine performer. The work undoubtedly showed off his impeccable training and depth of musical passion, and its short orchestral introduction and continuity between movements marked a shift in concerto expectations. Mendelssohn composed the work in three days, finishing just before the premiere, although he had planned out the movements in his head while traveling in Italy. He dedicated the work to his muse, Delphine, but if our genius had once harbored thoughts of pursuing a deeper relationship with her, they were by then pushed aside. He soon set off once again, this time on his way to Paris.

Mendelssohn’s Italian trip that inspired the fourth symphony bore fruit in another significant way, for it was also the time of his first mature piano concerto, finished in 1831.  Supposedly composed “hastily,” it was given its première in Munich in October of that year.  The composer composed several quite good student works in that genre earlier—and in them he advanced some felicitous changes in the form of the first movement, possibly under the influence of Carl Maria von Weber.  He did away with the time-honored practice of giving both soloist and orchestra separate shots at the main themes, and simply telescoped that section into a tighter form.  Both the soloist and the orchestra thereby “share” the single statement of themes.  He also—in a move that reflected a general tendency in the romantic period—joined all three movements for continuity.   Further, a typical romantic, he evidently felt that a straightforward recapitulation in the best classical style in sonata form movements was a bit repetitious.  Accordingly, he often varied and “developed” ideas somewhat in that section to give more drama to the approaching conclusion.  And typically all three movements are perfect examples of Mendelssohn’s characteristically brilliant, but somewhat delicate piano figurations.  This certainly is not the bellowing virtuosity of Franz Liszt that we hear here—although it must be admitted some of the percussive octaves in the last movement come close.  The slow movement, to my mind, alludes to the gentle atmosphere in the composer’s famous Songs without Words for solo piano.

The concerto begins with a stormy, short introduction in the orchestra, leading quickly to the entry of the piano—no long leisurely classical wait for the piano!  The dynamic first theme is heard right off, first primarily by the soloist, and then shortly in the orchestra’s turn.  It’s veritable storm of activity.  But, of course, a somewhat more lyrical second theme is expected soon in the relative major key, and we get it.  Here, Mendelssohn’s proclivity for harmonic explorations takes us through several interesting keys.  And, lyrical though it is, Mendelssohn sustains the rhythmic drive right through the section.  Unexpectedly, the dark, driving first theme suddenly interrupts enigmatically for a short statement before we appropriately return to the main second theme.  The middle section typically explores elements of both themes in swirls of figurations before transiting to an abbreviated recap that most surprisingly leads to a sudden interruption by a kind of fanfare in the brass in the parallel major key—G.  After a quick modulation to E minor and a very short cadenza-like passage for the soloist, the slow movement follows immediately.

The second movement begins with a hymn-like theme in the strings.  Taken up by the piano, some development of the idea leads smoothly into a new theme in a refreshing new key with its own harmonic diversions.  But, in this simple ABA movement, we return to the main theme, but of course, with Mendelssohn’s typical imagination enhancing and extending it, before its serene end.

The last movement—just like the middle movement—is introduced by a vigorous fanfare in the brass—in E minor before quickly modulating to the “right” key of G major.  The piano (again) jumps right in with florid figurations, and soon we’re off to the races with a scintillating rondo.  The main theme is straightforward and easy to recognize.

And, of course, being a rondo, we soon get a completely different idea—bubbling with figurations, whipping along in a frenzy. A quick re-statement of the first idea leads in best rondo fashion to another new idea.  After being tossed around a bit, naturally it yields to the main theme—this time developed a bit.  Finally, a last new idea surfaces, this time in quick dialogue with the orchestra.  The main theme finally ushers us to the end, but not before a quick allusion to the main idea from the first movement, embedded in a flurry of virtuosity.

This remarkably tasteful, entertaining, and well-constructed work is a perfect example of the composer’s standing as a classicist who nevertheless exemplified the best of romantic musical style.  All the more astounding was his age when he composed it:  twenty-two!  Mendelssohn’s piano concertos are not heard in our concert halls nearly as much as his violin concerto, or many of his other works, for that matter. Their graceful beauty and flawless craftsmanship are a refreshing delight. 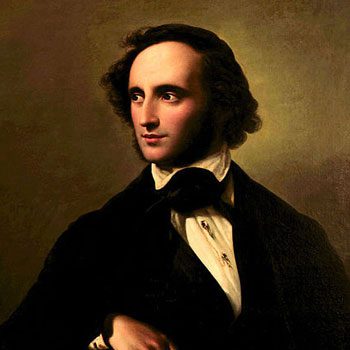