Haydn’s nicknames—“Father of the Symphony” and “Father of the String Quartet” are well earned. His sixty-plus quartets and over one hundred symphonies standardized the genres and inspired other great composers of the era such as Joseph Bologne, Wolfgang Amadeus Mozart, and Ludwig van Beethoven. Early in his career, Joseph Haydn (1732–1809) worked variously as a teacher and performer, but found financial security in 1761 when he accepted employment with the Esterhazys, a royal family he continued working for for over forty years. Most of his tenure was spent in the service of Prince Nikolaus, with whom Haydn became quite close—or at least as close as a top servant might come to a noble master. Haydn later credited his isolation in the Esterhazy courts for his prolific musical output. He told his first biographer, Georg August Griesinger, “My prince was satisfied with all my work, I received bonuses, I could experiment as the leader of an orchestra, observe what enhanced or weakened an effect, improve, add, cut, dare. I was isolated from the world … and so I had to become original.”

Prince Nikolaus died September 28, 1790, almost thirty years after he took the throne. Son Anton dismantled the Esterhazy orchestra. Haydn was left as one of a few remaining musicians on the payroll—a Kapellmeister without performers. He resettled in Vienna. While there, he met Johann Peter Salomon, an English promoter looking for performers for the upcoming London concert season. When Salomon read of the prince’s death, he dropped all his plans and hurried to Vienna to entice Haydn to return with him. “I am Salomon of London and have come to fetch you,” he proclaimed. Salomon commissioned an opera, six symphonies, and many other works that Haydn was contracted to conduct himself in London the following season. When Haydn arrived in the city in early 1791, his music immediately charmed the English populace, in spite of his inability to speak their native language. The feeling was mutual, for Haydn spoke of his London travels with warmth and affection. After two successful seasons, he returned to Vienna, but was lured back to the English capital in 1794 for another two years, a tour in which his acclaim exceeded the first.

The twelve London Symphonies, numbered 93 through 104, were Haydn’s final contributions to the genre, and certainly represent the composer at his best. Six of them were given descriptive titles, mostly to help identify them, a sort of pre-catalog measure. Symphony No. 103, “Drum Roll,” premiered at the King’s Theatre in March 1795. The piece gained its nickname from the opening timpani gesture. Bassoons, cellos, and basses follow in a slow introduction that segues into a lively Allegro theme. Not to be forgotten, the iconic drum roll and ominous bass theme reappear toward the end of the first movement, upsetting typical classical sonata-allegro form expectations and proving that Haydn had in no way lost his ability to create original material. A slow double theme and variations follows in the second movement, leading into a minuet and trio featuring clarinets, instruments Haydn did not have at his disposal in the Esterhaza orchestra. Haydn’s finale takes advantage of four horns that sound an initial call, which proceeds to one of the most satisfying conclusions of any work of the time. Haydn had once again thrilled his new English fans. Salomon hoped Haydn would stay on, but Prince Anton died in early 1795. His son, the new Prince Nikolaus II, summoned his Kapellmeister back to Vienna in hopes of rebuilding the Esterhazy musical establishment. Haydn complied. Although a return to London did not materialize, the musician never forgot his newly adopted city nor those who helped him through an uncertain time, propelling him from “Father of the Symphony” to “Perfector of the Genre.”

The symphony has been the major genre for orchestras since the eighteenth century.   While its viability seemed questionable as the twentieth century waned, it still has its adherents among contemporary composers, and will probably survive, though not with the same universality and vitality as before.  As one can well imagine, from its roots in the early eighteenth-century opera overture to the extended and monumental works of late Romanticism, such a long gestation period, growth, and maturity would produce many “parents.”   Haydn has popularly been known as the “father” of the symphony, but, of course, no one is.  It must be said though, that his contribution, at a critical time in its development was the most significant of anyone’s.   He, who was responsible more than any other for what is known as the “classical” musical style, created the most extended series of imaginative innovations and developments in the genre as it reached early maturity under the “big three,” Haydn, Mozart, and Beethoven.

Haydn had the good fortune as a young man to secure an appointment to the court of the wealthy Esterházy family not far from Vienna out on the Hungarian plains.  There, he was charged with oversight of a daunting variety of musical activities at the extensive estate of a succession of music-loving princes.  In the midst of a vigorous artistic environment at Esterháza, with a full schedule of sacred, theatre, chamber music, ballet, and large ensemble performances weekly, Haydn was charged with composing the music for much of the festivities. Taking advantage of his relative isolation, he had decades of opportunities to develop his style and grow his musical reputation from total obscurity to worldwide fame as Europe’s greatest and most respected composer.  One of the happy results was the creation of over 100 symphonies that collectively illustrate the evolution of the genre.   From the very early ones to the last great “London” symphonies, Haydn’s symphonies have remained central to the orchestra’s repertoire, even as they grew in sophistication and style, right along with the composer’s long life.

The culmination of this remarkable achievement, of course, are the twelve, so-called “London” symphonies that were the result of commissions that grew out of two visits to the city in 1791-02 and 1794-95.  The set is sometimes called the “Solomon” symphonies, as well, owing to the impresario who made the acclaimed visits possible.  No. 103 is part of the second group of six, and was composed in Vienna during the winter of 1794-95 in preparation for the première in London.  The latter took place in March of 1795 at the King’s Theatre to a tumultuous reception by the audience and critical acclaim in the press.   He was clearly enjoying the peak of his professional success.

The first performance was given by a large orchestra of about sixty players, preferred by Haydn and Mozart if available—contrary to today’s mistaken belief that small orchestras were always de rigueur.   The symphony is typical of Haydn’s late symphonies:  four movements in the usual forms and scored for a full complement of winds, strings, and timpani.  It takes its moniker from the famous unaccompanied timpani roll that opens it.

In today’s hyper world of the senses, Haydn’s creative eccentricities and well-known sly sense of humor almost seems impossibly subtle.  But they must be comprehended in the context of the times—a perspective almost lost to much of today’s generation.  In the first movement the unaccompanied timpani roll sets up a sense of dark foreboding that the composer heightens with the following passage in the low strings—the first four notes of which parrot the famed Latin chant for the dead. The meter is ambiguous, enhancing the mystery, but the mood doesn’t last very long—ending with some ominous accents on the weak beat (you’ll hear this idea again later).  The composer has set us up again, and a cheerful, boisterous theme announces the following Allegro con spiritu.  Haydn’s material that leads us through the important transition to the second theme is not perfunctory, but has its own attractive significance, replete with dynamic, unison scales.  When the so-called second theme arrives, it’s easy to spot, featuring the solo oboe in a decidedly waltz-like guise.

The development is a lucid example of the genius of the mature Haydn in maintaining a limited number of ideas, expanded and varied in a remarkable display of imaginative variants.  The parade of ideas seems constantly new, yet vaguely familiar.  Amidst the melodic gyrations we also hear a panoply of tonal areas, including the remarkable Db  section.  Some coy, soft dramatic pauses take us to the recap—conventionally lucid, and a fresh return to clarity.  The brief coda is introduced, as at the opening, by the ominous drum roll and threatening bass instruments, but is considerably shortened here and interrupted by the “laughter” of the high-spirited, exultant final Allegro.

The following andante is a lovely example of Haydn’s favorite form, the double variation.  It sounds complicated, but isn’t, consisting merely of a theme with two variations and a second, related idea with its two variations.  The two themes, themselves, almost seem like variations of each other, but maintain their identity here by the first one being in a minor key, and the second in the parallel major key. You’ll hear the first theme with a variation, then the second one with its variation. Haydn then does another variation on each theme. Easy to follow, easy to enjoy.  It’s an expansive movement, with an interesting coda.

The following minuet is certainly not a clichéd example of the elegant eighteenth-century ballroom dance.  Rather, it is a somewhat rustic affair that features the accented “Scotch Snap” on the downbeat.  In fact, it is more or less a bucolic Austrian Ländler.  You can almost imagine the slapping of Lederhosen.  There are startling excursions into some remote keys in the first section, the smoothly flowing figures of the second section giving the requisite contrast.  A charming minuet, indeed.

Ostensibly, the theme of the smashing concluding movement is a Croatian folk song—for Haydn played around with the folk style.  The horns open with a typical horn passage—we’ll hear much more of it later—and then repeated along with the principal theme.  Most are used to hearing movements with “first theme” and “second theme,” but it certainly is not requisite, for Haydn had an established penchant for making do with just one, and so it is, here.  When it’s time for the “second theme,” we hear a very slightly altered opening theme.  In fact, the entire movement is based more or less upon the opening rhythm of the theme.  It’s a veritable tour de force of economy-of-means and contrapuntal mastery.  The simple little rhythm just cascades from everywhere in roulades of counterpoint.  It is exactly what we are familiar with from the last movement of Mozart’s Jupiter symphony and the first movement of Beethoven’s fifth symphony. As the movement heroically drives to the end, the opening horn “fifths” constantly underpin it all, now joined by the trumpets to hammer out the smashing conclusion. Here, Haydn is at the zenith of his career—his astonishing talent reminding us that he’s not the genteel powdered wig “Papa Haydn,” and never was. 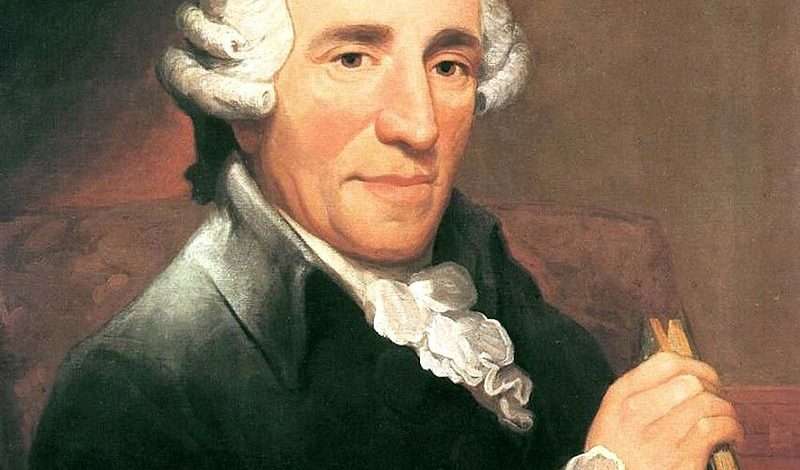