George Walker’s name is often associated with a string of firsts. Among other accomplishments, he was the first Black graduate of the Curtis Institute of Music, the first Black musician to earn a doctorate from the Eastman School of Music, the first Black instrumentalist to present a recital in New York’s Town Hall, the first Black artist to solo with the Philadelphia Orchestra, and the first Black composer to be awarded the Pulitzer Prize in Music (for Lilacs for Voice and Orchestra, 1996). The American pianist-composer’s training backs up these achievements. He began piano studies with his mother at age five. He graduated from high school at just fourteen years old and from Oberlin College at eighteen. Halfway through his undergraduate degree, he was named organist for the Oberlin Graduate School of Theology. In addition to his degrees from Oberlin, Curtis, and Eastman, he also studied at the American Conservatory in Fontainebleu with Nadia Boulanger. Walker served as a visiting professor at a number of U.S. universities, including the University of Colorado at Boulder in the 1960s. His permanent academic home, however, was Rutgers University in New Jersey. From 1969 to 1992, he took on the roles of professor, composer, department chair, and performance collaborator, presenting at least one faculty recital every year.

Walker’s catalog includes almost one hundred works for orchestra, voice, and chamber ensembles. The composer explored many modernist compositional trends of the twentieth century but still developed a personal style, mixing contemporary influences with his own use of color and sound layering. Tangents for chamber orchestra was Walker’s tribute to the new millennium. Written in 1999 and premiered in the year 2000, this short piece opens with a fanfare-like declamation that settles into alternating sections of musical anticipation and introspection, foreshadowing a new era full of unknown possibilities—a striking composition by a remarkable musician!

An iconic figure among Black American composers who worked in the classical field, Walker excelled marvelously in difficult times for men such as he.  He was a native of Washington, DC, the son of a Jamaican immigrant. The first Black composer to win the Pulitzer Prize for Music, he was educated at some of the most prestigious American schools:  Oberlin, Eastman, Curtis, and the American Conservatory, Fontainebleau.  Winner of Fulbright, Guggenheim, MacDowell, Whitney, and Rockefeller fellowships, he received commissions from outstanding orchestras, including the Boston Symphony Orchestra and the New York Philharmonic.  An accomplished pianist, he gave his debut recital at New York’s Town Hall, and performed Rachmaninoff’s third piano concerto with the Philadelphia Orchestra two weeks later—an auspicious beginning of a performing career.  Later, he toured Europe extensively.  After receiving the first doctorate given to an African-American from the Eastman school, he taught at several universities, including the University of Colorado at Boulder.  Honored, respected, and admired, he lived a long life, dying in 2018 at the age of ninety-six.

Any composer as highly educated, sophisticated, and long-lived as Walker is bound to have explored many fundamental ways of creating music. The variety of styles that he explored in his compositions bears out this truth.  From simple, tuneful allusions to Black music traditions to highly dissonant abstractions in the best manner of much of today’s challenging musical art, Walker cheerfully explored the limits.  Composers, like all artists, reserve the right to communicate clearly with their audiences.  Or, conversely, to entertain the most recondite techniques and inspirations for their art.  They have no obligations. Tangents is clear evidence of music whose internal structure, sound materials, and other generating elements are internal to the composer’s mind, and not necessarily easily apprehensible or clearly understood by the listener.  These internal elements served the composer well in the act of creation, but are not necessarily important to the listener.  With that in mind, look not for clear given meaning, but supply your own in this case.

Commissioned by the ProMusica Chamber Orchestra of Columbus, Ohio, to celebrate the turn of the millennium, the short one-movement composition has a first theme, a second theme, a diversion, and other familiar elements of musical form.  But, they will not be easily followed.  The putative second theme, the composer asserts is “derived from a pop tune easily identified in its proper context.”  Good luck.  Although, some suggest that it is a fragment of April in Paris. Possibly.  But it’s good fun to look for it.  There are bold, extremely dissonant sections and others that almost seem tonal and pleasant.  Dynamic, soaring gestures contrast with somewhat lyrical ones.  Loud and soft, disjunct and smooth, traditional elements and the avant-garde, Tangents is a study in all and is aptly illustrative of its original working title, Juxtapostion.  Throughout, an easily appreciated element is Walker’s complete mastery of eliciting a remarkable variety of textures and colors in the orchestra—perhaps this is the best place to start in enjoying this remarkable composition by one of our outstanding twentieth-century American composers.

Performed by the Fort Collins Symphony on the concert Anxious, Tender & Jaunty at the Lincoln Center, March 2022. 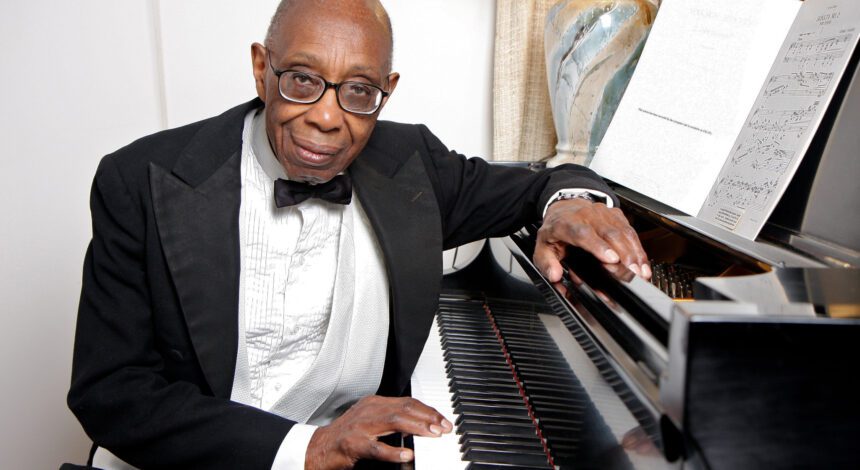