Prelude to the Afternoon of a Faun

Debussy was a critical figure in the transition from 19th-century romanticism to modern music. He was the most prominent composer associated with the musical style termed impressionism, an extension of the visual arts movement so named after Claude Monet’s 1872 painting Impression, soleil levant. In truth, Debussy was inspired much more by the symbolist poets with whom he spent his free time than Parisian painters, but his compositions surely exhibit aural characteristics that parallel the same effects produced visually in impressionist paintings, as well as through the words of his poet friends. Debussy entered the Paris Conservatoire at age ten. His mother had taught him the basics of reading and writing, but he had had no formal education beyond that. That he later found himself so at home in literary circles is remarkable. Debussy was a brilliant pianist, but instead chose composition after he failed to pass his piano exams. As time passed, he became more disenchanted with the traditional romantic approach to composition taught at the conservatory and established his own musical voice. In many late 19th-century musical works, thick textures and extended harmonies dominate. Instead, Debussy embraced ethereal lightness, parallel movement, blurred metrical and formal patterns, and quartal and modal harmonies.

Although Debussy composed across the genres, he was especially well known for his piano pieces and art songs. The orchestral Prélude à l’après-midi d’un faune, however, has become one of his most iconic compositions, a masterwork even. The tone poem was inspired by Stéphane Mallarmé’s verse L’après-midi d’un faune, written between 1865 and 1867 and published in 1876. The main character of the poem is a faun—a half man, half goat—who spends his time pursuing nymphs and playing upon his pan flute. Told as if from a dream, Mallarmé’s faun recounts his encounters with the nymphs in a way that is vague, leaving the reader to wonder if the story really happened, or if it was all simply a dream. Like the poetry upon which it is based, Debussy’s score provides musical images with softened edges, creating a hazy perception of an encounter that has not yet begun. The opening flute solo of Prélude sets up the programmatic scene,for long before the faun appears, the music emanating from his pipes is heard in the distance. Each subsequent restatement is heard differently, with fluctuating harmonies, like light changing throughout the day.

Debussy began several renditions of incidental music to accompany a reading of Mallarmé’s poem, but never completed any of them. The version we know today was certainly inspired by these initial attempts, and may even be a fusion of fragments from these. In an 1896 letter, Debussy wrote: “The Prélude à l’après-midi d’un faune, my dear Sir, is perhaps what remains of the dream at the end of the faun’s flute. More precisely, it is a general impression of the poem…” Mallarmé was not keen on the idea that his poetry be set to music, but was somewhat calmed when Debussy played him the piano score before the work’s premiere. Mallarmé expressed his contentment with the final product in a bit of verse sent to the composer:

Sylvain of ancient breath
If your flute succeeded
Hear all the light
That Debussy blew there.

Debussy adored painting and poetry, and his deep immersion in those arts is fundamental in searching for meaning in his personal musical style. His æsthetic was rooted in the French nineteenth-century literary movement known as “symbolism.” While many today know and speak glibly of “impressionism,” and associate Debussy with that style in painting, it is with the much less familiar concept of “symbolism,” specifically that in French literature, that informed almost all of his music. Symbolism is traced by most to the poet, Charles Baudelaire, as well as to the imagery and themes of Edgar Allen Poe, whose works in French translation were of great popularity and influence in France. Later, Stéphane Mallarmé and Paul Verlaine were the central figures of the movement, and whose influence on Debussy it would be difficult to overestimate.

Essentially, symbolists were interested in spirituality, dreamlike imprecision, and the indefinite nature of the imagination. They deplored artistic trends of the time that focused on nature, reality, objectivity and the like. The imagery in their poetry was elusive and indirect. Those familiar with movements in the visual arts will find more affinities in the Pre-Raphaelites, for example, than the Impressionists. In the former, a gauzy impression of an object or scene is not the intent, but rather a depiction of something apparently clear in perception but heavily laden with veiled meaning. An evocation of a feeling, rather than an impression was sought. Moreover, symbolist poetry was highly dependent upon the sound of the French language and the possibility of aural ambiguity.

Nowhere was this more evident than in the poetry of Mallarmé. His poem, L’après-midi d’un faune (1876), is the subject of Debussy’s one-movement “tone poem” and is his most recognized work. While the text concerns the awakening of a faun from a drowsy mid-afternoon nap, and his reflections on his memories of his adventures with nymphs that morning, the narrative is not straightforward and linear—and neither is Debussy’s score. A faun, of course, is a creature that is half goat and half man, symbolic in literature of untrammeled natural spirits.The nymphs are young, nubile, free spirits who sing and dance their way to amorous freedom.

A tone poem in the hands of masters such as Liszt, Smetana, and Strauss generally focused on very specific images and the stories behind them. But, this genre in the hands of Debussy (under the influence of the symbolists) approached the text in a much different way. His Prelude to the Afternoon of a Faun (1894), from the immortal opening languid, sensuous flute solo, creates an episodic series of feelings, atmospheres, and reflections rather than a story. The faun, half-dulled by the afternoon heat thinks random thoughts of “. . . enervating swoon of heat, which stifles all fresh dawn’s resistance,” “… girls sleeping, with their reckless arms around each other:” and “…my speechless soul and heavy-laden body succumb at last to noontime’s ceremonial pause.”

For these thoughts and moods Debussy crafted perfect orchestral colors, melodies, and harmonies. While not a follower of Brahms—nor, on the other hand, of Liszt, Wagner, and Strauss, either—Debussy, with this first great success, opened the door to the twentieth century in music, and it was never the same thereafter. 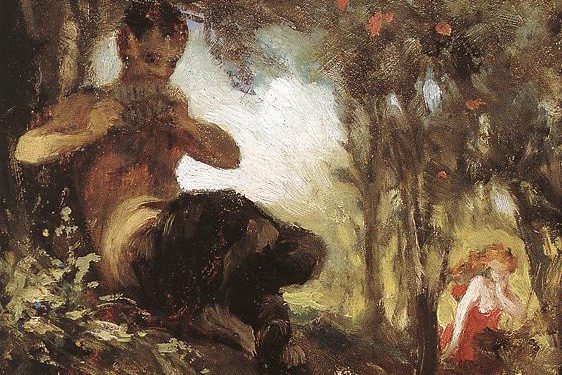