1905 marked a special time in the life of French composer Claude Debussy. In October of that year, he was blessed with a beautiful baby daughter. He and newly-divorced wife Emma Bardac bestowed upon her their own names in the form of Claude-Emma, but adoringly called the little girl Chouchou. Not too long afterward, the composer began writing a series of piano pieces that would become his Children’s Corner, completed in 1908. He dedicated the collection of six short movements to “my dear little Chouchou, with her father’s tender apologies for what is to follow.” While beauty often emanates from Debussy’s music, the composer himself could be gruff and gloomy. Children’s Corner portrays a side of Debussy not often revealed, that of affection and tenderness for the daughter he so deeply loved. As a result of the dedication, some have surmised that perhaps Debussy was writing music Chouchou might one day play herself, but it seems more likely that Debussy wrote the vignettes to play as the toddler sat near him at the piano. In 1910, Debussy’s Parisian colleague André Caplet orchestrated the piano work, conducting the symphonic premiere that same year in New York.

The set opens with “Doctor Gradus ad Parnassum,” referencing Clementi’s book of piano exercises and the tedium of scale practice. What begins as a regular set of scalar patterns gradually transforms, as the fictional player’s thoughts drift away and return. “Jimbo’s Lullaby” lovingly brings to life a child’s stuffed elephant, presumably named after P. T. Barnum’s magnificent creature Jumbo, who in the 1860s was housed in Paris’s Jardin des Plantes. The opening melody can only be described as lumbering. “Serenade for the Doll” was the first movement composed, evoking visions of imaginary interactions between Chouchou’s toys. “The Snow is Dancing” presents slow metamorphoses of ostinati patterns, envisioning a young girl watching the snow fall from her nursery window, or perhaps through a snow globe purchased for her by her father. “The Little Shepherd” is one of a number of pieces in which Debussy explores the pastoral world. Not unusually for the composer, the movement opens with a single melodic line, evoking a shepherd’s pipe. In Debussy’s orchestral compositions, most notably Prelude to the Afternoon of Faun, a pipe sound is often played by a solo flute, but Caplet chose to represent this shepherd with the oboe. The pipe-song returns twice again, transporting listeners to a countryside long ago. The final movement, “Golliwog’s Cakewalk,” fits in well with French society’s enthrallment at the turn of the century with the music of the United States, heard in many types of public entertainment establishments including cabarets, concert halls, supper clubs, and even at the circus. Black rag dolls were also in vogue, and Chouchou may have owned one in her collection, perhaps even one inspired by Florence Upton’s book character, Golliwog. “Golliwog’s Cakewalk” is an example of Debussy’s nod to jazz, with a syncopated dance section that bookends a satirical reference to Wagner’s Prelude to Tristan und Isolde, barely masking the composer’s contempt for the German master.

More than anyone, Claude Debussy truly was the father of much of the philosophical basis for the complete turnover in musical art that defined the twentieth century. His compositions established entirely new ways of thinking about the fundamental ways of defining and composing music in Western culture. And, along the way, he composed some of the most original, creative and, dare we say, beautiful music in the repertoire. His name, of course, is indelibly linked with what is popularly called “musical impressionism,” a term he deplored, but that doesn’t really specifically tell you much. What you may say is that he largely worked within a musical style that made little use of so many of the characteristics of a musical tradition that dominated the concert halls of the 18th and 19th centuries. Many of us are familiar with concepts such as sonata form; development; key relationships; major and minor tonalities, with their respective scales, counterpoint, fugues, and especially “developing” musical ideas in an ongoing linear fashion. As dominant as these procedures were, Debussy saw other ways of creating and working with musical ideas. His specifically French way of looking at things was quite a contrast to the ideas and methods of German composers. Debussy was not much interested in systems of musical composition, wherein each part—large or small—had a rational, expected, and traditional relationship to every other part. Rather, he focused upon listening to musical sounds in new ways—considering them just for their intrinsic sound, and not how they might fit into a hierarchy as a mere building block. He opened up new ways of composing and listening, and the musical world was changed forever.

Children’s Corner was composed between 1906 and 1908 as a suite of six movements for piano solo. It was dedicated to his beloved daughter, Claude-Emma, who was about three when the work was finished.  The titles were originally given in English. The suite has long enjoyed success and is in the standard repertoire of solo piano. But three years after its completion and publication, it was arranged for orchestra by Debussy’s close friend, André Caplet. While not a name well known to contemporary American audiences, Caplet was a talented composer—he won the Prix de Rome scholarship award before Ravel achieved that honor—and was the orchestrator of Debussy’s evergreen Clair de lune in the version so beloved by symphony orchestra audiences.

The title of Debussy’s first movement, Doctor Gradus ad Parnassum, is a wry reference to a title used for many centuries for instructional books and music.  It literally means “steps to Parnassus” and implies the student will ascend in understanding and skill each step up the way to the abode of the Greek gods.  A famous set of piano exercises by the indefatigable Carl Czerny (and Muzio Clementi, as well) bore the title, and Debussy composed as his first movement a tongue in cheek (hence, the “Doctor”) reference to one of the familiar, busy finger etudes. There, the comparison ends.  Debussy’s ethereal arabesques and washes of sound are from world distinctly remote from pedantic, pragmatic exercises.

Jimbo was an elephant that was a famous resident of the zoo at the historic Jardin des plantes de Paris—the main botanical garden in France.  Debussy picturesquely portrayed the ponderous pachyderm beginning with droll double basses.  Debussy’s frequent use of pentatonic and whole-tone scales is in much evidence. That being said, it is a rather melancholy picture of life in a zoo for the poor animal.

The third movement, Serenade for the Doll, depicts a Chinese porcelain doll using a stereotypical five-note Chinese musical scale and frequent intervals of a fourth. Moreover, the brisk, light, staccato texture is perfect to depict a presumed allusion to the mincing feminine steps of ethnic caricatures at that time. But, it is withal a cute piece and is a characteristic example of the composer’s penchant for challenging the listener to guess just what key he is in.

The Snow is Dancing is an apt example of Debussy’s gift for painting delicate images in sound, which seem to exist fleetingly only in the moment.  The diversion in the middle is based on the familiar whole-tone scale, giving it a kind of “floating” atmosphere.

In The Little Shepherd, we hear the shepherd playing his wind instrument, and there are three distinct episodes.  Each brief, meditative solo is followed by a dancing, spritely response with a gentle cadence.  The tunes are an apt example of Debussy’s frequent use of modal scales, rather than the traditional major and minor of Western harmonic practice.

The final movement, Golliwogg’s Cakewalk, is perhaps one of the more famous ones and is a cogent example of exquisitely French versions of American popular music.  A cakewalk is a dance that was a mainstay of nineteenth century American minstrel shows. The dance is characterized by syncopations and vigorous, strutting rhythms.  A “Golliwogg” was a stuffed Black doll dressed in a stereotypical minstrel show garb. It was en vogue at the time (the French loved it) and it was exemplary of the “other” that was a salient aspect of late nineteenth-century European cultural preoccupations. Today this whole phenomenon is appropriately viewed as insensitive and racist. Typical of Debussy’s wry sense of humor is his rather veiled reference to the famous chord from Wagner’s opera, Tristan und Isolde—a bizarre and cheeky juxtaposition if there ever was one.  That off-the-wall allusion returns several times in the middle section, played by languorous strings, surrounded by “banjo plucks.”

Those who are not experienced pianists, hearing these delightful works in this remarkably adroit and imaginative version for orchestra, can be forgiven for thinking that Debussy must certainly have conceived them originally for the orchestra. Collectively, they are an elegant tribute to Caplet’s complete mastery of the orchestral “sound” of his close friend. 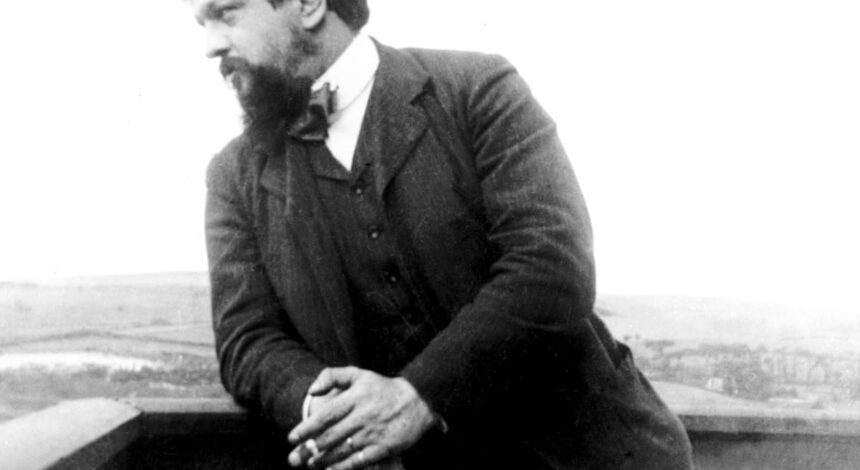