They say that good things come in small packages. A handwritten note, a sampler of Belgian chocolates, or a carefully selected piece of fine jewelry, each makes a lasting impression. Samuel Coleridge-Taylor’s Novelletten for strings, a brilliantly crafted set of short movements for strings, tambourine, and triangle, fits into this category as well. Written in 1901 and 1902, the work’s title may have been inspired by Robert Schumann’s Novelletten, op. 21, a set of piano miniatures composed in 1838. Coleridge-Taylor, a gifted violinist, wrote his four Novelletten for strings, infusing romantic sentimentality with a coloristic exploration of the modern string orchestra. Novelletten no. 2 contrasts two dance-like sections, one duple and one triple in an overall ABA form. No. 3, labeled “Andante con moto,” features a solo violin, revealing an emotional virtuosity and speaking to the composer’s love for his instrument. The fourth Novelletten, though intended as the finale of the set, works equally well as an opening number—its excitement preparing an audience for an evening of special music. The work was first dedicated to Miss Ethel Barns, a composer and virtuoso violinist who performed and premiered many of Coleridge-Taylor’s works, including the subsequent violin-piano arrangement of Novelletten. The orchestral version must have been a favorite of the composer, for even though his publisher Novello lost money printing the piece, Coleridge-Taylor programmed the set repeatedly on concerts he conducted throughout his career.

Samuel Coleridge-Taylor (1875–1912) was the son of a white, English mother and a Sierra Leonean medical student who met in London. Young Samuel, raised in his grandfather’s household by his single mother, picked up the violin quickly, showing musical talent at a young age. A scholarship at age fifteen led him to the Royal College of Music, where he eventually changed his major to composition. He studied with the great Charles Stanford Villiers, at times receiving more attention from his teacher than fellow students Gustav Holst and Ralph Vaughan-Williams. The young composer finished college with a publisher in place and a number of compositions in print. In the late 1890s, Coleridge-Taylor became increasingly interested in his own heritage and the concept of Pan-Africanism, which led him to study the history of Africans in America. He later noted that one of his lifetime highlights was meeting W. E. B. DuBois at the first Pan-African Conference in London in 1900. In 1898, he composed a cantata titled Hiawatha’s Wedding Feast that found instant international success. A group of African-American singers in Washington, DC founded the Coleridge-Taylor Choral Society, finding inspiration in the black composer’s music. They invited him to the United States, where he made three tours in 1904, 1906, and 1910. On the first trip, he conducted his own works with the Marine Band, and was invited to meet Theodore Roosevelt in the White House. Being forewarned of the discrimination he might face in U.S., Samuel wrote to his sponsor: “I can assure you that no one will be able to stop me from paying you my long deferred visit. As for prejudice, I am well prepared for it. Surely that which you and many others have lived in for so many years will not quite kill me… I am a great believer in my race, and I never lose an opportunity of letting my white friends here know it.”

Back in Britain, Coleridge-Taylor carved an artistic niche for himself. He led the London Handel Society from 1904 through 1912 and served as composition professor at London’s Guildhall School of Music and Trinity College of Music. Throughout his career, he received constant support from his wife, Jessie Sarah Fleetwood Walmisley. The two met while studying at the Royal College of Music and were later married in 1899, despite her family’s objections. Although publicly she remained in the background while her husband pursued his career, Jessie certainly had a voice in many of his artistic decisions. Upon the composer’s untimely death due to pneumonia at age 37, Jessie directed that the love letters she and Samuel had written to each other many years earlier be “scattered into his coffin.” 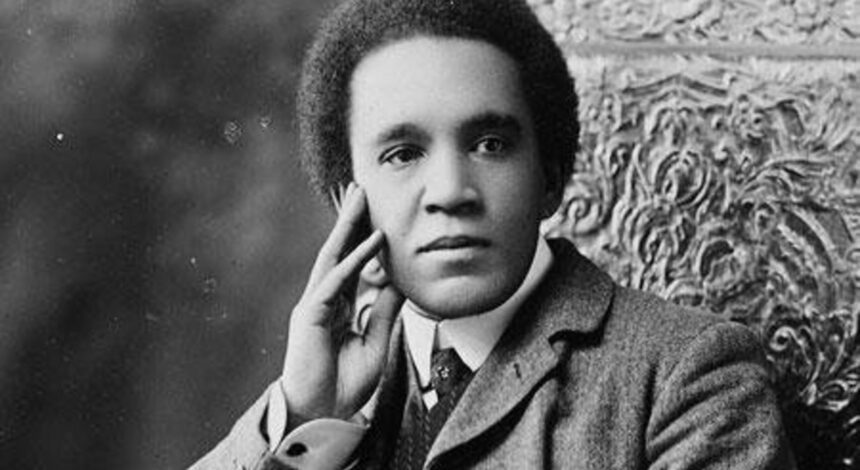