Piano Concerto in A Minor, Op. 7

According to Clara Wieck Schumann, “I once believed that I possessed creative talent, but I have given up this idea; a woman must not desire to compose—there has never yet been one able to do it. Should I expect to be the one?”  She must have written these dark words in a moment of despair, for she was, without a doubt, a gifted composer whose works are now highly respected, and for that matter, never really marginalized during her lifetime.  The difficulty was that she was revered as one of the great pianists of the nineteenth century—the equal of anyone—and a trailblazer who established norms for performance, repertoire, and general artistic integrity that we now customarily expect from virtuoso pianists.  Those who stand at the apex of performing excellence have always struggled to be accepted also as composers.  Of course, she was married to one of the significant composers of the century.  She championed and performed his works with devotion, and was his artistic partner and collaborator in every laudable way. If that were not enough, she bore eight children, raised them and her grandchildren, managed the household, earned the money, paid the bills, and travelled regularly to perform to Europe’s accolades.

Her father, Friedrich Wieck, sold and repaired pianos, as well as teaching the instrument. Her unusual talent surfaced early, and he more or less made her development his life’s work.  Sadly, he was an unpleasant, lifelong tyrant in every regard.  While her general education was neglected, her musical education was excellent, and exceptionally thorough.  From a very early age, she was expected to practice for hours daily  on piano, violin, and voice, and received rigorous training in music theory, counterpoint, harmony, and composition.  By the time she was eleven years old, she was already a touring concert pianist—and had known her future husband for two years.

Clara and Robert fell in love early, and fought bitterly with her father for years—including legal wrangles before they married when she was twenty-one.   Their marriage was one of deep devotion and mutual artistic respect.  When they wed in 1840, he was relatively unknown, and she was an international celebrity. However, they had already been collaborating artistically for some time. Robert encouraged her to compose and most of her works were published—they did not languish in obscurity.  In some ways, the two were the arts’ first “power couple.”  The first decade of marriage was blissful and burgeoned with musical success, but by the 1850s, Robert’s physical and mental health had declined precipitously.  In 1854, in desperation, he attempted suicide by flinging himself into the Rhine River.  After rescue, he demanded to be institutionalized in a progressive asylum.  There, he spent the next two years in dementia before his death in 1856.  Clara was never allowed to see him during that time, and visited with him only once, two days before his demise.

Indefatigable, Clara soldiered on for another forty years, active as mother, grandmother, concert pianist, composer, and teacher—not to mention her championship of Johannes Brahms.  Her last surviving child, Eugenie, died in 1938.  Clara was a remarkable woman in every way.

Schumann’s concerto for piano was completed, published, and given its first performance in 1836 when she was sixteen years old. However, its actual history is a bit more complicated.  She had begun it three years earlier, composing the last movement first, with more than a bit of Robert’s help; he orchestrated it, as well.  She had conceived it as a stand-alone work, but then went on to turn it into a concerto by composing the first and second movements—she orchestrated those.  The concerto displays all of the characteristics that one might predict in one so young and so consummately talented as a performer.  The virtuoso figurations are facile, challenging, and mature; her harmonies are advanced and colorful; her artistic imagination is rather unfettered; and, notably, her sense and command of musical form is adventuresome, and displays more than a little willingness for the unconventional.  We must remember, that, true to her times and generation, at that age she performed much of the somewhat trivial, bombastic, but extremely difficult repertoire of composers for solo piano of the time—the best of which was Franz Liszt.  It must be said that much of her concerto is redolent of the young Frédéric Chopin—not that that is any crime.

The first movement begins with a bold statement of the first theme, followed by a flourish in the solo piano.  Soon, the soloist gives the full main theme, unsupported by the orchestra—and it does really smack of Chopin—in all the good ways.  Florid passagework worthy of Liszt leads to the second theme, but here, conventionality breaks down. Is this sonata form? Is this an unusual approach to theme and variation technique?  The jury decidedly is still out, for the form is unusual and ill-defined. The second theme seems to start out in the conventional key, but soon goes astray, never to return.  A kind of development section ensues in which we do hear allusions to the themes, and harmonic diversions in Ab, F minor and E major.  However, there’s no recapitulation, for the mood quiets, the tempo slows, and we quit the movement.  A slow ascending arpeggio leads us directly to the winsome Romanze in Ab (remember, this is a concerto in A minor—a “distant” key from Ab).  What could be more Romantic?  After an ingratiating harmonic diversion, we return to the main key with a cello solo accompanied by piano figurations that is nothing less than sublime.  Perhaps it is somewhat of a reach to think of the heart-rending cello solo in Brahms’ second piano concerto, but there it is.  The cello leads us to the end and the transition via soft timpani to the energetic last movement is introduced by the trumpets.

After the more modest proportions and mood of the first two movements, the last movement is clearly the most substantial of the three, which more or less turns the order of magnitude around from the usual procedure.  It is largely conventional for concertos, as well as for much of the repertoire, to craft first movements with more gravitas, and last ones that break the tension, closing with a somewhat lighter or more sparkling ambience.  Not so here.  It is easy to see why Clara originally conceived the last movement as a stand-alone, virtuoso tour de force for piano and orchestra, without the need to say more.  Most folks see the rhythm and energy of the movement as a typical Grand Polonaise, certainly in the tradition of Chopin—and there is much say for that.  The form is similar to a traditional rondo.  But, in keeping with the composer’s rather free observance of established form in the first movement, she similarly crafts a very loose version of the clear contrasting sections characteristic of a rondo. But, of course, it all doesn’t really matter.  This dynamic movement is exciting, entertaining evidence of the remarkable executant skills of this very young woman.  By this time in her life, Clara Schumann was an experienced, admired performer in the cutthroat world of acclaimed piano virtuosos—and this formidable, imaginative closing movement is dazzling testimony thereof. 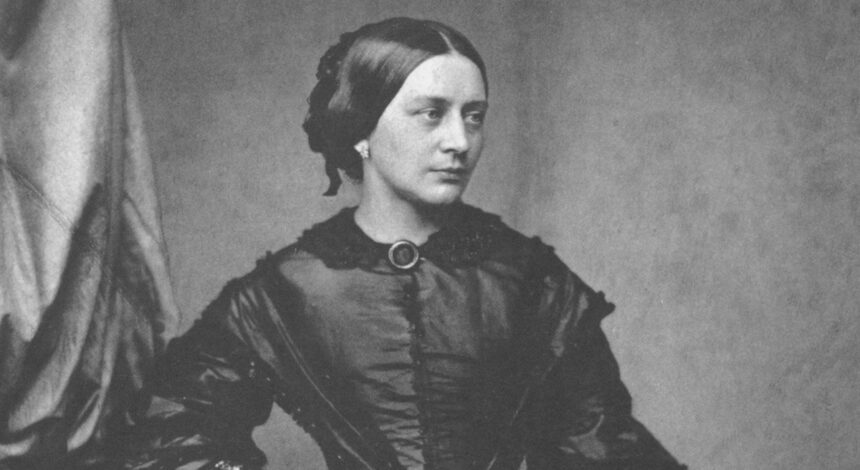