Beethoven’s fifth symphony is the iconic work of classical music.  It pervades the whole world of symbols and imagery of musical art as an evocation of a welter of ideas.  In a sad way it is almost impossible to escape all of these associations extrinsic to the work itself and to focus only on Beethoven’s composition.   But distancing one’s self from it all and listening to the symphony as if for the first time can be a joy—as this writer has found, sitting in the best seat in the house (in the back of the orchestra).

By the time that Beethoven had com-posed this work he was a well-respected composer in Vienna, but certainly not hailed as a genius.  The first three symphonies, three piano concertos, piano sonatas, string quartets—all had bolstered his growing reputation before he finished this symphony. It took him rather a long time, almost four years, as he interrupted his work frequently to produce some significant compositions:  The Razumovsky string quartets, the fourth symphony and fourth piano concerto, and the first version of his only opera, Fidelio. Beethoven was a practical man, and when a commission materialized, he shifted his work to where the money was.  He finally ground out the completion of the Fifth Symphony and presented it on an ill-starred concert at the Theater an der Wien on December 22, 1808.  It was an all-Beethoven affair, presenting the premières of not only the Fifth Symphony, but also the Sixth Symphony, the Fourth Piano Concerto, and the Choral Fantasy (a precursor to his Ninth Symphony), as well as various other compositions.  The concert was four hours long and the hall was literally freezing.  Moreover, Beethoven, who was conducting, had to start over in one work after a mistake derailed things.  The proceedings were not helped by his awkward, grand-eloquent conducting which led to knocking over some lamps and accidentally smacking an unfortunate stagehand in the face.  All of this was soon forgotten and the written record shows that Beethoven’s fifth symphony was quickly accorded general acclaim, and was on its way to immortality.

The defining characteristics of the work are well known, and focus upon rhythmic vitality, a thitherto unknown sense of drama, and imaginative structural details—but most of all, upon a stunning coherence and economy of elements.  The latter is the foundation of the first movement, famous for its four-note motto beginning and the wringing almost to death of every musical possibility of the short idea.  Forget “fate knocking at the door,” this is simply a dramatic tour de force of musical coherence.  Even if one ignores the adroit manipulation of the melodic content of the opening idea, it is astonishing how well the movement stands upon its own feet from a purely rhythmic perspective.

The second movement is an elegant set of variations on two themes.  The key of the movement is Ab, and even if most of us don’t have perfect pitch, it just sounds fresh and unexpected when the violoncellos and violas enter with one of Beethoven’s most ingratiating melodies in that particular key.  The second theme is a more triumphant one, in C major, another remote and refreshing key.  The variations gracefully work themselves out with these contrasting themes in a movement quite different from the first.

The third movement is the traditional dance movement, here cast in Beethoven’s innovative scherzo rhythm—the stately dance of his predecessors being sped up considerably.  However, it’s not a rollicking good time to be had by all, here. Rather, it opens with a mysterious arpeggio in the low strings that ends shortly on some chords with enigmatic meaning.  Soon this is shatteringly interrupted by the unison horns in a virile melody that seems related to the opening of the symphony.  The middle of the movement, called the trio, is usually an opportunity for contrast, and we do get it.  It starts out contrapuntally with a vigorous and challenging passage for the violoncellos and double basses—it’s a famous one!  They snarl and shake it like a dog.  Ultimately, a truncated version of the opening returns, but even softer, and here is where real magic occurs.

Beethoven bridges the transition into the last movement with a delicate solo passage in the first violins played over pianissimo sustained notes in the seconds and violas—the basses and timpani softly throb. In one of the most eerie and tension-building passages in all the literature, the melody snakes up and down in a crescendo that jubilantly leads to the C major theme that resolves all previous troubled thought.  For this glorious moment Beethoven brings in three trombones, contra-bassoon, and piccolo—thitherto found only in the opera orchestra. The last movement is long, as three themes are worked over, interrupted only by the striking innovation of a brief, serene reference to the third movement.  It’s as if Beethoven is saying, “OK, we win, but it may be only a brief victory.”  The recapitulation ensues, followed by an enormous coda—longer than any other section so far.  We hear the main three themes again, only in a kind of reverse order.  The long coda is needed to erase all doubt as to what prevails over the diversions and dark moods of the other three movements.  Victory is ours, and the fifty or so measures of emphatic C major chords seal the finale. 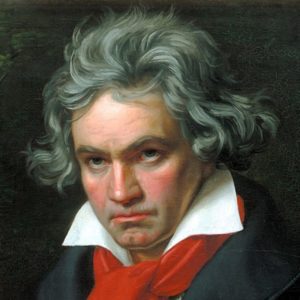