The years 1801-02 marked the nadir of Beethoven’s emotional life, as he grappled with the reality of his increasing and permanent deafness.  His despair was total, and the prospect of suicide is clearly implied in the documentary evidence.  Tumultuous and bitter family feuding entered into this cruel time, but the famous “Heiligenstadt Testament” records his final triumph over the depression and his resolve to live and compose.  That he did, and soon received a prized engagement to compose an opera, and an important concert of his compositions followed shortly thereafter, as well.  This historic concert featured his oratorio, Christ on the Mount of Olives, the First Symphony, the Third Piano Concerto (with the composer at the piano), and the Second Symphony.   For such a grand and ingratiating work, the second unfortunately stands understandably in the shadow of later symphonies far more familiar to today’s concert audiences.  Nevertheless, it would be a serious mistake to relegate it to the realm of “youthful” works.  Not at all a “farewell” to the eighteenth century, as his First Symphony has sometimes been characterized, the second is the creation of a composer of genius who had already spent almost a decade in Vienna–the musical capital of Europe—successfully building his reputation as a powerful, formidable, and expressive composer primarily of piano and chamber music works.  He had fast become the beloved composer of the corpus of works that still stands squarely at the center of his enduring reputation and popularity.  Symphony No. 2 (composed largely during 1802) is yet again prima facie evidence of the ability of artists to soar above sorry personal circumstances and produce works that totally transcend the emotions of their peculiar state.  Mozart was a case in point, and here in his Second Symphony, Beethoven has created a most sunny, cheerful and expansive exploration of optimism—all during his low moods grappling with his growing deafness.

This is not a lightweight work, though, for it totally prepares us for the monumental Third Symphony. It begins with a Haydn-like slow introduction that portends the scope of things to come.  After several dramatic moments—some of which may remind us of jagged gestures in the Ninth Symphony, the introduction glides effortlessly into the cheerful opening.  The themes are also Haydn-like, simple and often based on triads, but there is a decided difference in the intensity and brilliance in which Beethoven characteristically works out his material.  It’s clearly the Beethoven we all know and love.  The ensuing larghetto is from the untroubled world of his contemporary, Franz Schubert—a mellifluous and tuneful affair that takes little of what we have come to expect in Beethoven’s intense and often tragic slow movements.  A string of ingratiating melodies, often involving warm, romantic clarinets, walks us along in a floating mood of serenity.  The third movement, as one would expect, is a scampering scherzo, a modest little one at that, characterized by quick alternations of high and low, loud and soft, and frequent changes of instrumental color.  The middle part is a leisurely, flowing affair that provides the requisite contrast to the bustling bookends of the form.  The last movement is an expansive forward-looking exercise in the Beethoven style with which we are so familiar.  It opens with a bumptious “hiccupping” theme that is unusual, to say the least.  This is not the time nor place to explore various theories of its origin as an onomatopoeic rendition of Beethoven’s infamous digestive problems.  However, suffice it to say, it’s clearly a case in point of the composer’s well-known coarse sense of humor.  All of this aside, whatever its origin, it provides perfect fodder for the composer’s consummate skill in constructing a rousing finale out of almost any little musical idea.  The movement drives to conclusion exhibiting most of the marvelous traits of the mature Beethoven, but to most listeners, in a relatively unfamiliar work.

Performed by the Fort Collins Symphony on October 2nd and 3rd, 2020 alongside Louise Farrenc’s Overture no. 2 and Beethoven’s Violin Concerto in D Major featuring Igor Pikayzen. 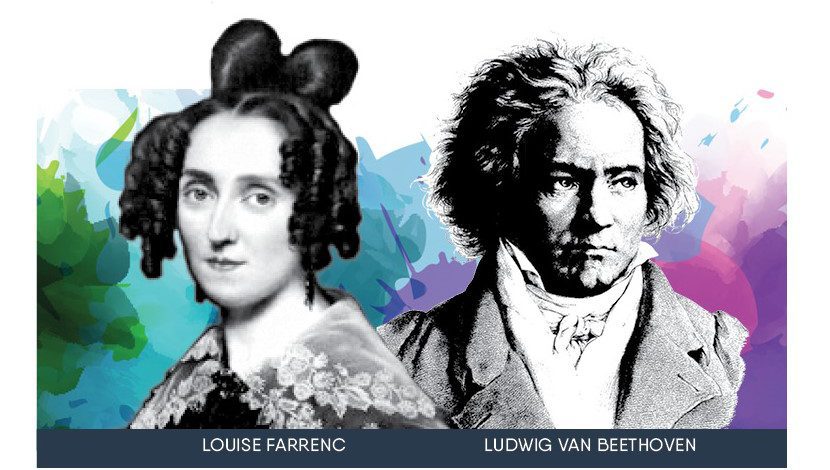