Beethoven wrote a gaggle of overtures, some were admittedly potboilers (his heart really wasn’t into them, but his financial needs were), but most were what we expect of the man.  The four overtures associated with his opera, Fidelio, stand in the forefront of them, but the Coriolan Overture is a major work, as well.  It was composed in 1807 as incidental music for a performance of the now obscure 1804 play by the same name by Heinrich Joseph von Collin—not for Shakespeare’s similarly titled work.

It’s a stormy composition, and perfect for a drama rife with tragedy and personal remorse.  In short, Gaius Marcius Coriolan was a 5th century Roman general who had led successful campaigns against Rome’s enemies. Like so many foolish generals he developed political aspirations, but was unsuccessful, and thrown out. In revenge, he turned traitor and led an army of his former enemies to attack Rome. His mother entreated him to desist, but it was too late to turn back. In a fit of regret and shame, he committed suicide.  Duty, Honor, Country, etc.  Remember, 1804 was still the “classic” period in everything from literature, music, painting, and sculpture to furniture and Empire waistlines. So, themes of great Romans and their moral conflictions were all the rage, and still are universal.

The première was played the year it was composed in the home of Beethoven’s patron, Prince Lobkowitz (this was usual in Vienna in those days, public concert halls were not). Beethoven’s ambitions for music for drama are evident in the work, and for that matter, so is his natural talent for inherent musical drama. Commentators traditionally agonize over the natural awkwardness of forcing the linear nature of drama onto the arch form of sonata structure:  drama moves on—sonata form returns to the beginning, etc.   Well, Beethoven, like most opera overture composers, just worked around that dilemma. He doesn’t opt to tell a story; rather he extracts the essence of the conflict. In Coriolan, Beethoven sensibly constructs a work of just two musical ideas that respectively represent the central moral conflict of the drama:  the turmoil of Coriolan’s desire for revenge, but with regret, versus his mother’s entreaties to desist in his terrible scheme.

Mozart’s most serioso key was G minor; Beethoven’s was C minor.  So, after several incisive lightening-strike chords, the pulsating, ominous theme of Coriolan in the latter key bolts off.  When we reach the second theme, it’s a graceful thing of beauty, and, of course, it represents Coriolan’s mother pleading for him to desist from his certain tragic end. These are the simple conflicting elements from which Beethoven weaves his musical drama.

The sonata form is clear, thus easy to follow. Remembering the time of this composition—after Symphony No. 3 (Eroica) and before Symphony No. 5—the attentive listener will hear so much that is suggestive of both symphonies.  Thunderous off-beat accents, thorough development of melodic motifs, a repeated rhythmic figure that underpins the whole, and the conclusion of a movement that just quietly falls apart to dissolution—to just name a few.  Beethoven opts to emphasize the lyric theme of the mother in the recapitulation, rather than the stormy Coriolan theme—saving it to the end for dramatic purpose.  When it finally does appear, it is weak, fragmented, and certainly not bold.  Coriolan’s quiet demise is clearly not heroic; rather, it evokes traditional definitions of classical tragedy. 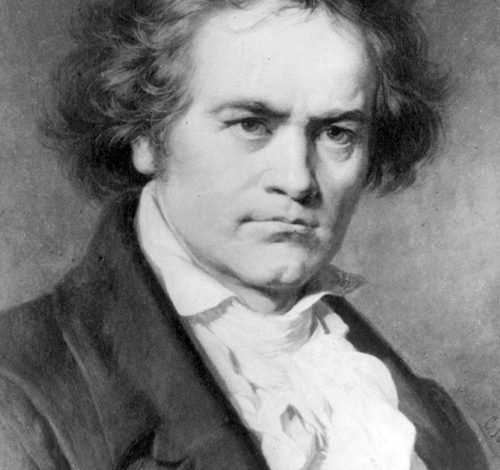