Happy New Year! For western tastes there will be no parades or football this year. Instead we use the day to continue to recover from our colds and take a walk alongside the Westlake. Many businesses are open on this day such as laundry and convenience stores. Others are closed (pharmacies and banks.) Cafes and coffee houses are certainly doing an excellent business. Restaurants the same. It appears that just about anyone can open up a business by hanging out “a shingle.” They range from those selling wares off the back of a bicycle, to barbers setting up shop in the median of a highway to give haircuts, to high-rise department stores and malls. This is also true of restaurants which range as small as a pot on a fire on the street, to family-style Pho hangouts where one or two community tables exist, to fast-food restaurants (both Vietnamese and other international fare including McDonalds and Kentucky Fried Chicken), specialty restaurants which are the current rage in town, to high end spots such as the one at the top of the Intercontinental Hotel. Every gradation in-between is also available, you just need to smell and look.

This is the first time we have ventured any distance on foot and we discover there are often no sidewalks to get us out of the street, so cars and motorbikes zoom by, sometimes close enough to feel their breeze and vibration. We manage to get to an ATM, buy some ice cream on the street, and return without mishap.

The weather has been a constant gray, in fact, we have not seen any sunlight since our arrival. There has been light rain at times, otherwise from morning to evening, the look almost never changes. This is typical of this time of year and it gives many parts of the city a mysterious look. Thang has commented on how projects are started and slowed or abandoned. Hanoi is building high-rise roadways and subways and there are cranes and scaffolding covered in fog almost everywhere you turn your gaze.

There were big crowds in the central Hanoi area with streets blocked off for large celebrations. The street lighting is amazing with many giving the look of fireworks. This will continue throughout the day and we are taken by Thang and Lan to dinner near the Hanoi Opera House before attending the Vietnam National Symphony’s New Year’s Night Concert. As we pass by the Opera House they are removing scaffolding in front that was used for an outdoor concert from the previous evening. We park a block away and go into Pellini’s a lovely Italian restaurant with excellent food and drink. This is a regular hangout for musicians from the VNSO, thus Thang and Lan know the staff very well and we are put upstairs at a window table.

We next head to the opera house, a smaller version of the Paris Opera which the building is modeled after. This is just one instance of the French influence left after the departure of that country (certainly the food scene is another!) The building opened in 1911 and has seen many events since that time, musically and political. Boxes line the house in tiered array and one can still feel the opulence in the heavy wooden and padded seats, marble that surrounds the lobby, and chandeliers hanging from the ceiling. There are large gathering rooms as well, several lined with mirrors. In one corner of the mirrored glass is a reminder of the unrest found so much in the history of this country, a bullet hole!

Tonight is a special concert that will feature the orchestra, four soloists, five Vietnamese composers, and will be fully televised. The stage is decked-out with flowers and a large screen at the back announcing each piece, a classy technological touch. The concert is well received and ranges from Shostakovich Festival Overture (with the extra brass!) to the finale of Beethoven Symphony No. 5 to O Sole Mio. Leslie and I very much enjoyed the “Vietnamese Pizzicato” work. Honna, their Japanese music director, conducted with elegance throughout and the orchestra sounded quite good on the amplified stage. Microphones were used only for this concert because of the broadcast, but as I was informed, will not be used for regular concerts such as mine coming up.

After the concert we head back to the car only to run into Maestro Honna and several musicians headed to Pellini’s for an after concert meal that went to 2 AM. We passed on this affair and went back to the room . . . there will be a rehearsal the next afternoon! 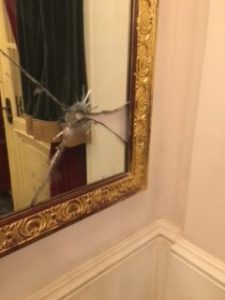 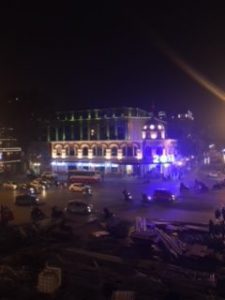 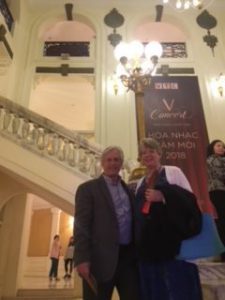 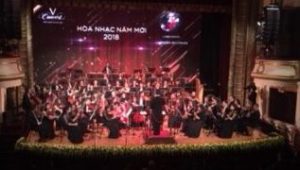